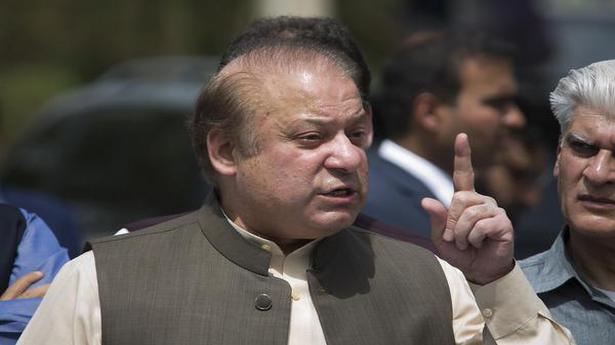 Pakistan’s jailed former Prime Minister Nawaz Sharif was on Friday remanded into the custody of the country’s anti-graft body for 14 days after he was arrested in another money laundering case.

A National Accountability Bureau (NAB) team took Sharif, 69, into its custody from Kot Lakhpat jail Lahore where he is serving a seven-year imprisonment in the Al Azizia Mills corruption case and presented him before the judge of an accountability court for his physical remand.

NAB prosecutor Hafiz Asadullah Awan sought 15-day physical remand of Sharif, arguing that the suspect is involved in money laundering under the garb of sale and purchase of the shares of the Chaudhry Sugar Mills.

NAB has accused Sharif of being a direct beneficiary of Chaudhry Sugar Mills and his daughter, Maryam, who was arrested in connection with the case in August along with her cousin Yousuf Abbas, of holding over 12 million shares in the sugar mills.

The court, however, granted 14-day physical remand of Sharif to NAB. He is being shifted to NAB headquarters in Lahore where he will be interrogated for money laundering charges against him.

The Chaudhry Sugar Mills money laundering case is the latest in a series of corruption cases against Sharif and his family members. Sharif was ousted from the office of prime minister in 2017 in the Panama Papers case. Later, he was convicted for 10 and seven years in Avenfield and Al-Azizia corruption cases respectively. He had secured bail in Avenfield.

Hong Kong leader Carrie Lam said on Tuesday she has never asked the Chinese government to let her resign to end the city’s political crisis, responding to a Reuters report about a voice recording of her saying she would step down if she could. Hundreds of thousands of people have taken to the streets since […]

Pakistan Prime Minister Imran Khan’s former wife, Reham Khan, has won “substantial” damages and received an apology from a Pakistani news channel over defamatory allegations by a government minister during a show last year. At a hearing in the High Court in London on Monday, Justice Matthew Nicklin was informed about the apology and undisclosed […]

Indian-American first to be indicted for bump stock possession since ban in U.S.

An Indian-American man has been indicted in the U.S. for possessing a bump stock attached to his rifle, the first known case since the device was banned by the Trump administration earlier this year. Ajay Dhingra, 43, is facing up to 10 years in jail and a $250,000 fine if convicted and is set to […]