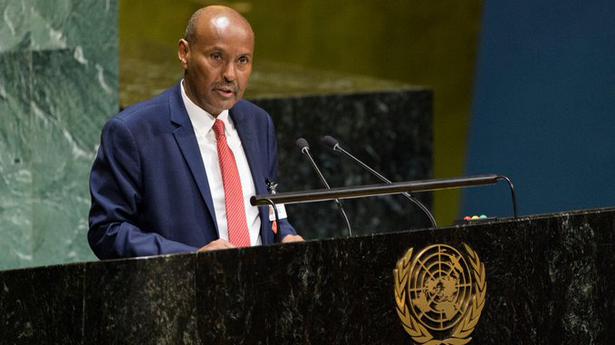 Presenting the report of the International Court of Justice to the 193-member General Assembly on Wednesday, Mr. Yusuf said in its judgment of July 17, the principal judicial organ of the United Nations found that Pakistan had violated its obligations under Article 36 of the Vienna Convention and that appropriate remedies were due in this case.

In a major victory for India, the ICJ had ruled that Pakistan must review the death sentence awarded to Mr. Jadhav, a retired Indian Navy officer who was sentenced to death by the Pakistani military court on charges of “espionage and terrorism” after a closed trial in April 2017. India had argued that consular access was being denied to its national in violation of the 1963 Vienna Convention on Consular Relations.

The bench led by Mr. Yusuf had ordered an “effective review and reconsideration of the conviction and sentence of Mr. Kulbhushan Sudhir Jadhav.

Mr. Yusuf elaborated on several aspects of the Court’s ruling in Mr. Jadhav’s case while presenting his report to the General Assembly.

He said one of the issues that the Court had to examine was the question of whether the rights relating to consular access, set out in Article 36 of the Vienna Convention, were in any manner to be excluded in a situation where the individual concerned was suspected of carrying out acts of espionage. The Court noted in that regard that there is no provision in the Vienna Convention containing a reference to cases of espionage; nor does the Article concerning consular access, Article 36, exclude from its scope certain categories of persons, such as those suspected of espionage. Therefore, the Court concluded that Article 36 of the Vienna Convention was applicable in full to the case at hand, he said.

The Court was also called upon to interpret the meaning of the expression without delay in the notification requirements of Article 36 of the Vienna Convention. The Court noted that in its case, the question of how to determine what was meant by the term without delay depended on the given circumstances of a case.

Taking into account the particular circumstances of the Jadhav case, the Court noted that Pakistan’s making of the notification some three weeks after Mr. Jadhav’s arrest constituted a breach of its obligation to inform India’s consular post without delay , as required by the provisions of the Vienna Convention, he noted.

He further said that another interesting legal question that the Court had to address was whether a bilateral agreement on consular access concluded between the two Parties — India and Pakistan — in 2008 could be read as excluding the applicability of the Vienna Convention.

The Court considered that this was not the case, he said.

More precisely, the Court noted that under the Vienna Convention, parties were able to conclude only bilateral agreements that confirm, supplement, extend or amplify the provisions of that instrument. Having examined the 2008 Agreement, the Court came to the conclusion that it could not be read as denying consular access in the case of an arrest, detention or sentence made on political or security grounds, and that it did not displace obligations under Article 36 of the Vienna Convention.

Coming to the crux of the Court’s ruling, he said the Court considered the reparation and remedies to be granted, after it had found that the rights to consular access had been violated.

“In line with its earlier jurisprudence in other cases dealing with breaches of the Vienna Convention, the Court found that the appropriate remedy was effective review and reconsideration of the conviction and sentence of Mr. Jadhav.

Mr. Yusuf told the General Assembly that the Court moreover clarified what it considered to be the requirements of effective review and reconsideration.

It stressed that Pakistan must ensure that full weight is given to the effect of the violation of the rights set forth in the Vienna Convention and guarantee that the violation and the possible prejudice caused by the violation are fully examined.

Mr. Yusuf said that following its ruling, the Court received a communication dated August 1, 2019 from Pakistan confirming its commitment to implementing the July 17 judgment in full.

In particular, Pakistan stated that Mr. Jadhav had been immediately informed of his rights under the Vienna Convention and that the consular post of the High Commission of India in Islamabad had been invited to visit him on August 2, 2019, Mr. Yusuf said.

India had welcomed the verdict of the International Court of Justice, saying that the ruling of the court by a vote of 15-1 upheld India’s position in the case.

Israeli aircraft struck several sites for Gaza militants late Saturday in response to incendiary balloons launched from the Palestinian enclave. The Israeli military said the sites belonged to Hamas, the Islamic group ruling the territory, and included weapons manufacturing and intelligence-gathering facilities. There were no reports of injuries from the airstrikes in southern Gaza Strip. […]

He had formally received the support of a majority of lawmakers earlier in the day, paving the way for a controversial power-sharing deal with rival-turned-partner Benny Gantz Source: thehindu.com Related