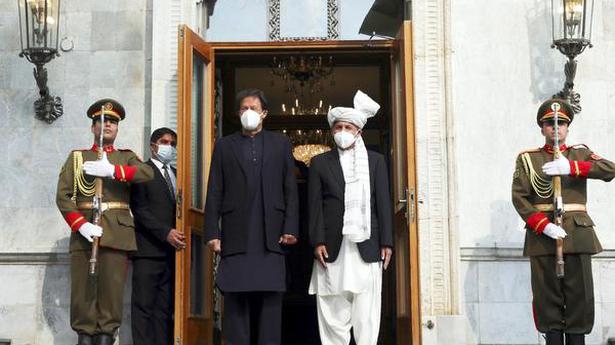 The visit comes at a crucial time for Afghanistan as Kabul government negotiators and the Taliban are holding U.S.-brokered negotiations in Qatar to chart a course for a post-war Afghanistan.

Pakistan Prime Minister Imran Khan met with Afghanistan President Ashraf Ghani on his first official visit to Kabul on Thursday, focussing on the ongoing peace talks with the Taliban as well as on building trust and strengthening relations between the two often acrimonious neighbours.

Mr. Ghani called Mr. Khan’s visit “historic” while the Pakistani Prime Minister assured the Afghan leader that his government would do “everything possible” to help reduce violence in the war-torn country.

The visit comes at a crucial time for Afghanistan as Kabul government negotiators and the Taliban are holding U.S.-brokered negotiations in Qatar, where the Taliban maintain a political office, to chart a course for a post-war Afghanistan.

“You come with a series of very important messages … but fundamental to this is that violence is not an answer, a comprehensive political settlement for an enduring peace within the framework of our values, our Constitution in the Islamic Republic is the way to the future,” Mr. Ghani told Mr. Khan at the presidential palace.

Mr. Khan acknowledged Pakistan had played a key role in getting the Taliban to the negotiating table and that Islamabad remains concerned that “despite the talks in Qatar, the level of violence is rising.”

“Whatever is possible, we will do to help reduce the violence,” and help move the Afghan-Taliban talks toward a cease-fire, Mr. Khan said. “The whole objective of this visit is to build trust, to communicate more. … We will be helping you.”

Neither of the leaders addressed this week’s announcement from Washington of an accelerated U.S. troop withdrawal from Afghanistan, which has rattled both sides in the Afghan conflict. There are fears of worsening violence and regional chaos, which some say could embolden the local Islamic State group’s affiliate to regroup and perhaps even try to build another “caliphate.”

Under an earlier deal between the U.S. and the Taliban that outlined a gradual pullout, the remaining U.S. forces were to leave Afghanistan by next April. The Pentagon now says some 2,500 troops will leave by January, just days before President-elect Joe Biden’s inauguration, leaving another 2,000 or so U.S. forces in place.

Pakistan has been applauded by Washington and Kabul for its role in getting the Taliban to the peace table, first in direct talks with the United States, which resulted in an agreement that led to the so-called intra-Afghan negotiations now under way in Doha.

Mr. Khan’s visit followed that of Afghanistan’s chief peace envoy Abdullah Abdullah who visited Pakistan in September as the uneasy neighbours turned a corner from a relationship marked by suspicion and downright hostility toward a partnership for peace in the region.

While in Islamabad, Mr. Abdullah urged Pakistan’s powerful military to use its influence to press the Taliban to reduce attacks and the level of violence. The insurgents, who hosted Osama bin Laden and al-Qaida until their regime was toppled by the 2001 U.S.-led invasion, now have control over half of Afghanistan.

Malaysia’s sports-loving Sultan Abdullah Sultan Ahmad Shah called for racial unity as he was installed on Tuesday as the country’s 16th king under a unique rotating monarchy system. It was a double celebration for Sultan Abdullah from central Pahang state, who turned 59 the same day. He was picked as Malaysia’s new ruler in January, […]

A bomb blast ripped through a vegetable market in Pakistan’s Quetta city early Friday, killing at least 14 people and injuring several others, media reports said. At least seven of those killed in the bomb blast at Hazarganji area of Quetta, the provincial capital of Balochistan, belonged to the Hazara community. The security forces fear […]

While Mr. Trump’s doctor said the President is not currently on oxygen, he refused to say whether the President had ever been on oxygen. Source: thehindu.com Related