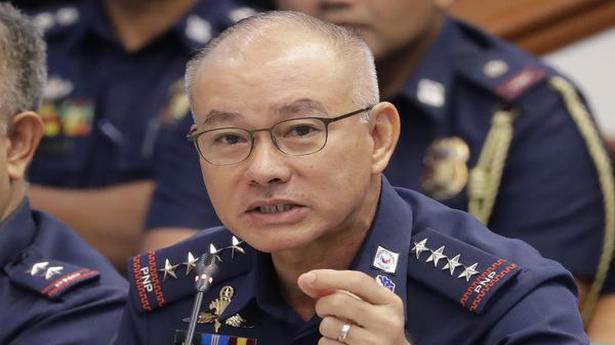 The Philippine national police chief resigned on Monday after he faced allegations in a Senate hearing that he intervened as a provincial police chief in 2013 to prevent his officers from being prosecuted for allegedly selling a huge quantity of illegal drugs they had seized.

Gen. Oscar Albayalde said his decision relinquishing his post was accepted by Interior Secretary Eduardo Ano over the weekend but insisted on his innocence, saying he has never been criminally or administratively charged for the alleged irregularity.

Gen. Albayalde resigned a few weeks before his scheduled retirement on Nov. 8.

Addressing the 190,000-strong police force in the last flag-raising ceremony he led at the national police headquarters, Albayalde ordered the policemen to continue serving the Filipino people well. “Do not let these challenges demoralize or stray you from your path,” he said.

The allegations against Gen. Albayalde were the latest dark cloud to loom over the national police force, which has largely been enforcing President Rodrigo Duterte’s bloody anti-drug crackdown that has left thousands of mostly petty drug suspects dead, alarmed Western governments and human rights groups and sparked complaints for mass murder before the International Criminal Court.

Gen. Albayalde headed the police force in Pampanga province north of Manila when 13 of his officers seized a large quantity of methamphetamine, a powerful and prohibited stimulant, in a raid.

The officers later faced allegations that they presented a small fraction of the seized drugs in a news conference, possibly to foster their promotion, then hid and sold the rest, with suspicions being fueled when they purchased pricey SUVs not long after.

Gen. Albayalde’s men allegedly freed a suspected Chinese drug lord in exchange for a huge bribe then arrested another foreigner, who they presented as the owner of the seized drugs.

Gen. Albayalde pointed out that state prosecutors cleared the officers of criminal complaints they had faced for the alleged offenses.

Gen. Albayalde said the allegations against him may have been an offshoot of jockeying for the top police post that he would vacate if he has stayed in his post until his retirement.

But two police officials, including a general who has retired from the force and is now a city mayor, testified in Senate hearings that Gen. Albayalde did not take adequate actions to have his men be criminally prosecuted.

One of the two officials, Aaron Aquino, who now heads the Philippine Drug Enforcement Agency, testified that Albayalde called him then to inquire about the status of the cases against his men.

Gen. Albayalde acknowledged that as a result of the 2013 incident, he was put on a “floating status,” which meant he was transferred to a regional police force without being given any specific assignment or post.

Several months after, however, he was appointed as metropolitan Manila police chief and as national police chief in April last year.

“No protest was made on my appointment,” Gen. Albayalde said. “Implicitly, it may be assumed that the president himself was aware of my appointment to that position.”

Asked in recent weeks about the possibility of firing Gen. Albayalde, Mr. Duterte replied he would allow Mr. Ano to make a recommendation to him after an assessment. The wait contrasts with Duterte’s outright firing of other government officials accused of corruption and irregularities.

Revolt in the time of carnival

On a street with old warehouses and bars sitting side by side in the old quarters of the city, a group of 100-odd people — all wearing red T-shirts with an image of Fidel Castro smoking a Cuban cigar — danced around a drummer and singer belting out a samba song. With beer flowing like […]

The U.S. and China had signed a deal in January to end their 22-month-long trade war. Source: thehindu.com Related