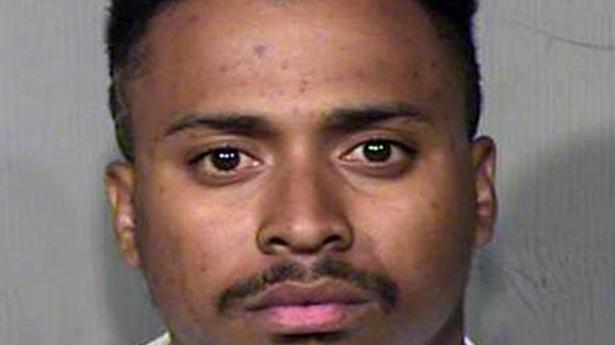 A Phoenix man has been arrested on suspicion of killing his wife, two of his young daughters and a man who the suspect thought was romantically involved with his wife, police have said.

Smith was arrested Thursday evening as he drove from an apartment complex where officers had responded to a shooting. There, they found the body of 46-year-old Ron Freeman. A woman and another man were shot and wounded at the complex, Sgt. Thompson said.

“It is my understanding that for whatever reason he elected not to shoot her,” Sgt. Thompson said.

The suspect told detectives during an interview that he believed “in God’s eyes it was all right for him to deal with someone in this manner who had been involved in adultery or an extramarital affair,” Thompson said.

He described the scene at the apartment complex as chaotic, with firefighters treating victims while authorities did not initially know the shooter’s whereabouts.

Nearly two months ago, Catalina Santana jumped a turnstile in the Santiago metro and helped launch a movement that changed the course of Chilean history. Student protests over a fare hike morphed into a nationwide call for socioeconomic equality and better social services that brought millions to the streets and forced President Sebastiŕn Piũera to […]

Germany’s Bild newspaper calculated last week that China owes Berlin around $162 billion in coronavirus damages, prompting a angry response from Beijing, news reports said. The tabloid’s estimate of damages — over $1,938 per capita if Germany’s GDP falls by 4.2 per cent — was presented in an article headlined, “What China Owes Us.” The […]

Sri Lanka’s suspended police chief has petitioned the Supreme Court, accusing President Maithripala Sirisena of failing to prevent the Easter bombings that killed 258 people. In a 20-page complaint, Inspector-General Pujith Jayasundara disclosed serious communication gaps between intelligence agencies and security arms of the government, all which fall under Mr. Sirisena. Jayasundara’s petition In the […]