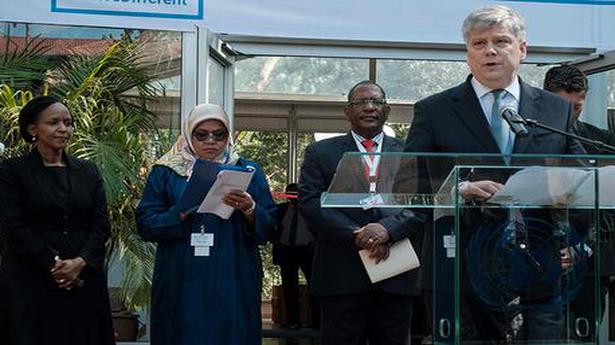 Countries from around the world set their sights Monday on a pivotal deal to curb plastic waste, a source of long-term pollution and worsening contamination of the ocean’s food chain.

Thousands of delegates, business leaders and campaigners are in Nairobi for the five-day UN Environment Assembly, the top annual forum on the planet’s environmental crisis.

The UN wants individual countries to sign up to “significantly” reduce plastic production, including a phasing out of single-use plastics by 2030 — a goal inspired by the 2015 Paris Agreement on voluntary reductions of carbon emissions.

“In the field of (plastic) pollution we don’t have such agreements,” Siim Kiisler, UN Environment Assembly president and Estonia’s environment minister, told journalists as the gathering got underway. “This is the first time (we have) to convince member states to make international commitments.”

A landmark report due to be out this week is expected to ram home the warning of the threat to ecosystems from rampant plastic and chemical waste.

The world currently produces more than 300 million tonnes of plastics annually, and there are at least five trillion plastic pieces floating in our oceans. Microplastics have been found in the deepest sea trenches and high up the earth’s tallest peaks, and plastic consumption is growing year-on-year.

“Plastic is a very good material, it’s durable, flexible and light,” Mr. Kiisler said. “This means we should make the best out of it for as long as possible instead of disposing of it.”

The Nairobi meeting comes against the backdrop of series of UN reports outlining in stark terms the damage mankind is doing to the planet, much of it due to reckless consumption.

“These things are all linked: climate, the environment, waste,” a delegate said.

One briefing said the cost of ecosystems loss through agriculture, deforestation and pollution was a much as $20 trillion since 1995.

The One Planet Summit on Thursday will bring together heads of State, including French President Emmanuel Macron and Kenyan counterpart Uhuru Kenyatta to lend political clout to the process.

Some Chinese companies are seeking new purchases of US agricultural products, China’s official Xinhua news agency said on Sunday, citing authorities. Some Chinese enterprises have inquired with U.S. exporters about the purchase of agricultural produce and applied for the lifting of tariffs on the products, Xinhua said. To meet China’s consumer needs, relevant Chinese enterprises […]

US sees gaps in Pakistan’s fight against terror funding

Pakistan has implemented international standards to combat money laundering and terror financing and has also criminalised such acts, “but implementation remains uneven”, according the US State Departments report on terrorism. The Congress-mandated report, released on Friday, represents official US assessment of the state of global terrorism during last year and includes country reviews, Dawn news […]