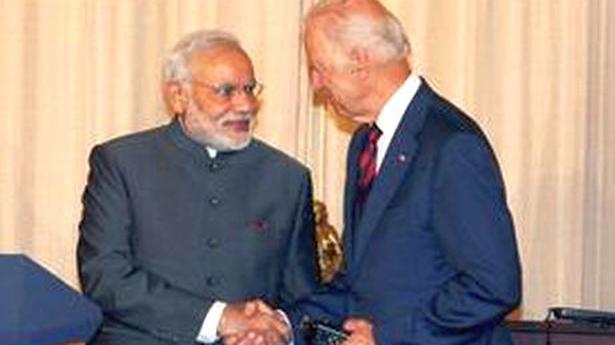 “Spoke to U.S. President-elect Joe Biden on phone to congratulate him. We reiterated our firm commitment to the Indo-U.S. strategic partnership and discussed our shared priorities and concerns, COVID-19 pandemic, climate change and cooperation in the Indo-Pacific region,” Mr. Modi wrote on Twitter.

I also conveyed warm congratulations for VP-elect @KamalaHarris. Her success is a matter of great pride and inspiration for members of the vibrant Indian-American community, who are a tremendous source of strength for Indo-US relations.

In a statement,the MEA said that Mr. Modi described Mr.Biden’s election was “a testament to the strength and resilience of democratic traditions in the United States.”

During the conversation, Mr. Modi also recalled previous meetings with Mr. Biden, when he visited India in 2014 as Vice President,and in 2016,when he chaired the Joint Session of the U.S. Congress that the Prime Minister had addressed during his 2016 visit to the U.S.

Mr. Modi had already sent a congratulatory message via Twitter to Mr. Biden last week on his “spectacular victory” in the U.S. elections which concluded on November 3. President Donald Trump has made sweeping allegations of fraud in the elections — not backed by adequate evidence — and has consequently not conceded the election.

Mr. Modi and President Donald Trump shared a publicly close relationship, appearing together at rallies in Houston and Ahmedabad in 2019 and 2020, respectively. The Trump campaign used this bonhomie in its campaign messaging to woo Indian American voters. A number of other leaders in the Indo-Pacific region and from Europe had spoken to Mr. Biden this week as per his presidential transition team.

The India-U.S. relationship has had broad support on both sides of the aisle in the U.S. with Democrats and Republicans bringing different challenges and opportunities for the relationship in the spheres of democracy and human rights, regional policy, trade and immigration.

Democratic presidential candidate Joe Biden said Thursday that President Donald Trump has “tossed a stick of dynamite into a tinderbox” with the targeted killing of Iran’s top general in an airstrike at Baghdad’s international airport. The former vice president joined other Democratic White House hopefuls in criticizing Mr. Trump’s order, saying it could leave the […]

The country’s first Rajdhani Express, which revolutionised Indian Railways by way of speed and luxury in the 1960s, turned 50 on Sunday. Decorated with red and yellow marigold flowers it chugged out of Howrah station on its golden jubilee run. An Eastern Railway (ER) official said the Kolkata-New Delhi Rajdhani Express embarked on its first […]

Two to three militants are suspected to be hiding in the area. One militant is believed to have been shot dead, according to officials. Source: thehindu.com Related