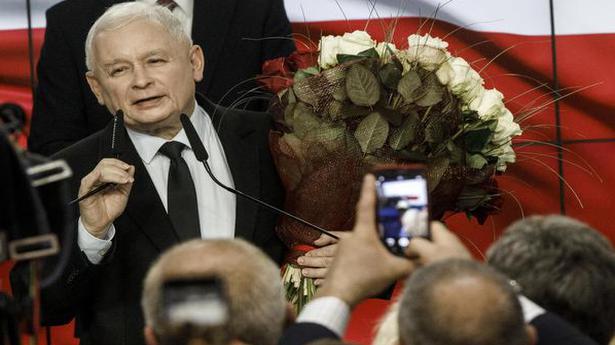 Poland’s nationalist Law and Justice (PiS) was on course to keep its ruling majority after a general election on Sunday, an exit poll showed, a victory likely to stoke concern about democratic standards in the largest ex-Soviet European Union state.

The poll by Ipsos gave PiS 43.6% of the vote, with 27.4% of the ballots going to the centrist Civic Coalition, an umbrella group that includes the Civic Platform formerly led by European Union Council President Donald Tusk. A leftist bloc garnered 11.9% of votes in the poll.

Opposition groups and Poland’s EU partners say that during its four years in power, PiS has undermined the independence of the judiciary, forced public media to promote its agenda and taken other steps to quell dissent.

The party has cast the election as a choice between a society rooted in traditional Catholic values and a liberal order that promotes a chosen few and undermines family life.

The EU has launched unprecedented legal action against PiS over its justice reforms, which PiS says are needed to make courts more efficient and fair.

PiS has drawn support from poorer Poles who feel they have missed out on prosperity since the collapse of communism in 1989. The party has mixed nationalist rhetoric with a vast welfare programme financed by an economic boom.

It has depended on close links with Poland’s dominant Catholic Church, with senior officials frequently attending religious ceremonies and events, and the party has espoused stronger religious values in public life.

Voter turnout surged to 61.1%, the highest in a parliamentary vote since a 1989 partially-free election that ushered in the end of communist rule in Poland.

Pakistan Prime Minister Imran Khan will visit China later this month,to meet the country’s top leadership and woo investors, officials sources said. During the visit, Mr. Khan will attend the China-Pakistan Business Forum in Beijing on October 8, according to the China Council for the Promotion of International Trade. The exact date of the visit […]