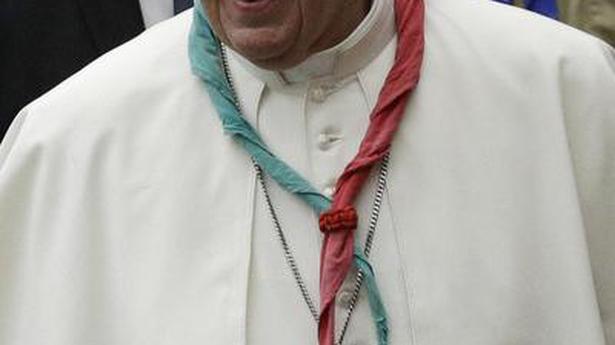 Pope Francis will visit Thailand and Japan in November in a visit expected to highlight his call for complete nuclear disarmament and honor the small Catholic communities in each country.

The Vatican confirmed the Nov. 19-26 trip, and its diplomatic representative in Thailand, Archbishop Paul Tschang In-Nam, announced the Thai stop on Friday. Pope Francis will be in Thailand on Nov. 20-23 before heading to Japan, where government spokesman Yoshihide Suga said he would meet with the emperor.

It will be Pope Francis’ fourth trip to Asia, where he has already visited South Korea, Sri Lanka, the Philippines, Myanmar and Bangladesh.

During his official visit to Thailand, Pope Francis will preside at religious ceremonies and pay pastoral visits to Catholic communities.

Pope Francis’s Japan visit includes Tokyo as well as Hiroshima and Nagasaki, which were hit by U.S. atomic bombs at the end of World War II.

Pope Francis has frequently spoken out about the risk of nuclear war, most emphatically during a 2017 disarmament conference at the Vatican where he signaled a shift in church teaching about nuclear deterrence.

In that speech to Nobel laureates, NATO officials and diplomats, he warned that the Cold War-era strategy of deterrence was no longer viable and urged instead complete nuclear disarmament.

“If we . . . take into account the risk of an accidental detonation as a result of error of any kind, the threat of [nuclear weapons’] use, as well as their very possession, is to be firmly condemned,” he said.

U.S. has no plan to evacuate embassy in Baghdad, more forces being sent to compound

The United States has no plans to evacuate its embassy in Baghdad and additional forces are being sent following violent demonstrations outside the compound by protesters and militia fighters enraged by American air strikes, U.S officials said on Tuesday. U.S. President Donald Trump blamed Iran for “orchestrating” the attack on the U.S. embassy in Baghdad […]

Coronavirus emergency holds a very grave threat for world: WHO

China’s coronavirus outbreak poses a “very grave threat for the rest of the world”, the head of the World Health Organization (WHO) said on Tuesday in an appeal for sharing virus samples and speeding up research into drugs and vaccines. WHO director-general Tedros Adhanom Ghebreyesus was addressing the start of a two-day meeting aimed at […]

In Sri Lanka, a bitter brew