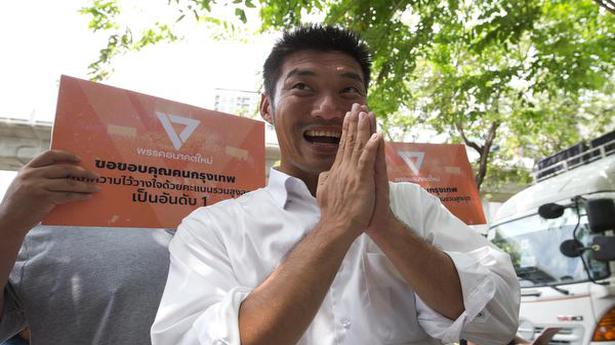 The leader of a popular new Thai political party that ran a strong third in last month’s elections met with police Saturday to hear criminal charges of sedition against him filed by the ruling military junta.

Thanathorn Juangroongruangkit was greeted by a crowd of around 300-400 supporters chanting “Keep fighting, Thanathorn!” as he arrived at the Pathumwan police station in Bangkok to answer a police summons on a complaint of sedition and assisting criminals filed by a junta officer. The charges carry a maximum prison sentence of up to nine years.

Police Gen. Srivara Ransibrahmanakul, deputy chief of police, said on Wednesday that the charges against Thanathorn stem from his role in a student demonstration on June 24, 2015. He said the case had stalled because of several reshuffles in positions of the responsible officers.

Thailand has been led by a military government since a coup in 2014 and the ruling junta has kept a tight lid on dissent. It has slapped criminal charges against critics while some had been detained for up to weeks for “attitude adjustment” sessions at military bases in efforts to change their views.

The coup leader, Prayuth Chan-ocha, became junta chief and prime minister and is now seeking to lead the next government after a party backing his reappointment won the most popular votes, according to preliminary results of the March 24 elections.

The Future Forward Party positions itself as youth-oriented and is deeply opposed to the military rule. Its strong showing in the elections has made them a target for the military and its supporters. Several criminal complaints and protests to election authorities have already been lodged against Thanathorn and his party.

The election results are due to be ratified by May 9. Meanwhile, political parties are in a race over which side will be able to gather enough support to form the next government.

Maryam Nawaz, Pakistan’s former Prime Minister Nawaz Sharif’s daughter, was arrested here on Thursday in a money laundering case while she was visiting her jailed father, an official said. On July 31, the 45-year-old Pakistan Muslim League-Nawaz (PML-N) vice president Ms. Nawaz was questioned by the anti-corruption agency officials in connection with the alleged money […]