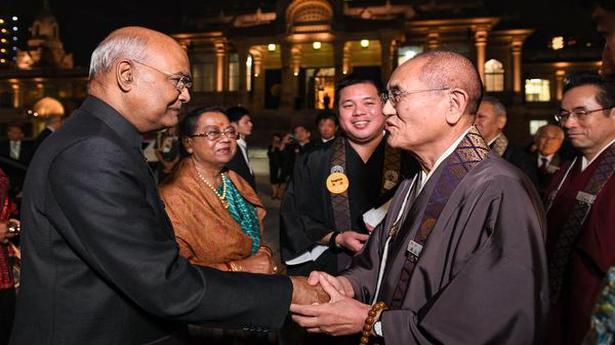 President Ram Nath Kovind arrived in Tokyo on October 21 to attend the enthronement ceremony of Emperor Naruhito, to be held on October 22, and also visited a Buddhist temple in Tokyo where he planted a Bodhi sapling, which he carried from India.

The president arrived in Tokyo in the morning after concluding his five-day state visit to the Philippines.

He will be attending the enthronement ceremony of Emperor Naruhito on October 22, the Rashtrapati Bhawan tweeted.

“Delighted to visit and pay respects at the Tsukiji Hongwanji Buddhist Temple in Tokyo. At the Temple, planted a Bodhi sapling that I carried from India. This sapling would grow in its new august surroundings and symbolise the Indo-Japan civilisational ties and our common heritage,” the president tweeted in both English and Japanese.

The enthronement ceremony of 59-year-old Emperor Naruhito’s ascension to the Chrysanthemum Throne marks the high point of succession rituals that began in May and will last through the spring.

Tuesday’s ceremony allows Mr. Naruhito to proclaim himself Japan’s 126th emperor in a ritual dating back to the 7th century.

Mr. Naruhito has been a full-fledged emperor since succeeding in May after the abdication of his father, Akihito.

During his three-day visit, Mr. Kovind will also interact with the Indian community in the Japanese capital.

On the afternoon in October 23, he will travel in a superfast train to Kakegawa city, which houses a large number of Japanese companies.

There he will participate in the foundation ceremony of Sino Soto, a place which will be developed as a temple with space for meditation, yoga and as a centre to highlight Indian tradition and culture, the Ministry of External Affairs said in a statement ahead of his visit.

Karnataka’s bid to secure approval for a dam project at Mekedatu during Monday’s meeting of the Cauvery Water Management Authority (CWMA) in New Delhi goes against the Supreme Court’s final verdict on the river dispute, Chief Minister Edappadi K. Palaniswami said on Wednesday. “Tamil Nadu has been raising the issue for quite some time now. […]

U.N. takes no action on order against Myanmar on Rohingyas

The U.N. Security Council on Tuesday discussed the International Court of Justice’s order that Myanmar must do all it can to prevent genocide against the Rohingya Muslims, but failed to agree on a statement. Myanmar’s ally China as well as Vietnam, which is part of the regional Association of Southeast Nations along with Myanmar, objected, […]

Six wild elephants drowned after slipping off a waterfall in northeast Thailand, authorities said Saturday, with two others saved after they became stranded while apparently trying to rescue one of those that fell into the current. Officials in the northeastern Khao Yai national park were alerted to elephants “crying” for help at 3am, the Thai […]