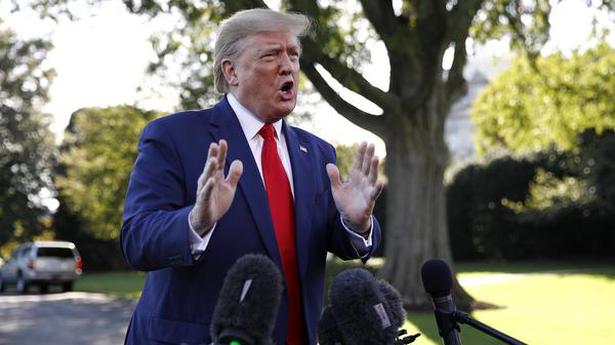 The United States of America is being “very tough” on Turkey and has imposed the strongest sanctions, President Donald Trump said, as a delegation headed by Vice President Mike Pence prepares to leave for Ankara on Wednesday to press the Turks to stop their military offensive in northern Syria.

Speaking to reporters at the White House on Tuesday, Mr. Trump also reiterated that his administration wants to bring U.S. soldiers back home.

The Turkish offensive, which began last week after the U.S. decided to withdraw troops from Syria, aims to push the Kurdish-led Syrian Democratic Forces (SDF) from the border region. Turkey considers the biggest militia in the SDF a terrorist organisation.

The Turkish government wants to create a “safe zone” in the area, where it can resettle up to two million Syrian refugees currently in Turkey.

The ongoing violence in the region, severely undermines the Defeat-ISIS campaign, endangers civilians and religious minorities and threatens the security of the entire region, the White House said.

The administration is resolved to maintain security in the region, the safety of civilians and the continued detention of ISIS fighters, it added.

On pulling out troops from Syria, a move he has been criticised for, Mr. Trump said, “We want to bring our soldiers back home after so many years and they are the greatest warriors in the world.”

“They are policing, they are not a police force. They are a different kind of a force. We want to bring our soldiers back home and we are being very tough on Turkey and a lot of others, he said.

In Ankara, Mr. Pence will reiterate Mr. Trump’s commitment to maintain punishing economic sanctions on Turkey until a resolution is reached, the White House said.

“We put the strongest sanctions that you can imagine but they get a lot, we have a lot in store if they don’t have an impact including massive tariffs on steel. They ship a lot of steel to the United States. They make a lot of money shipping steel. They won’t be making so much money,” Mr. Trump said.

He has imposed sanctions on Turkish ministries and senior officials, proposed to raise steel tariffs and end negotiations on a $100 billion trade deal.

Meanwhile a bicameral, bipartisan resolution was introduced in the Congress opposing Mr. Trump’s decision in Syria.

“Since President Trump gave Turkey the green light to attack our Kurdish partners, Democrats and Republicans in the House and Senate have been united in our swift and serious condemnation of this reckless action, which threatens countless lives, endangers our Kurdish partners and undermines our credibility in the world,” according to the statement.

The Kurdish administration in northern Syria has announced a deal with the Damascus government on Syrian troop deployment near the border to fend of the Turkish offensive.

British Opposition lawmakers failed on June 12 in their latest attempt to ensure the U.K. can’t leave the European Union without a divorce deal. The House of Commons voted 309-298 against setting aside a day later this month to try to pass legislation that would prevent a no-deal Brexit. “This is a disappointing, narrow defeat. […]

The Taliban on Saturday said the gap is narrowing in talks with U.S.’s special peace envoy over a timetable for the withdrawal of U.S. troops from Afghanistan. The two sides are continuing to meet in Qatar. In a voice message to , the Taliban spokesman in Doha, Sohail Shaheen, said both sides have offered new […]

Rocket blast at U.S. Embassy in Kabul on 9/11 anniversary

A rocket exploded at the U.S. Embassy in Afghanistan just minutes into Wednesday, the anniversary of the 9/11 attack on the United States, but officials at the compound declared all-clear about an hour later and reported no injuries. A plume of smoke rose over central Kabul shortly after midnight and sirens could be heard. Inside […]