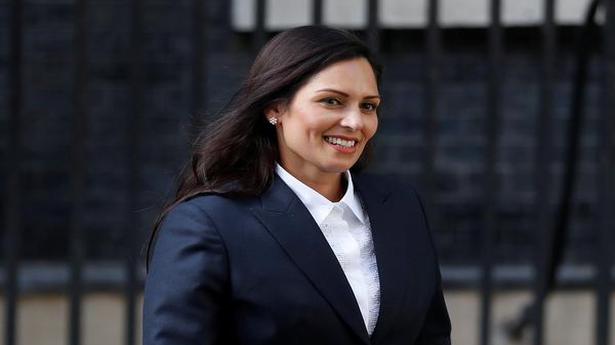 Priti Patel, an ardent Brexiteer who was among the most vocal critics of Theresa May’s Brexit strategy, on Wednesday took charge as Britain’s first Indian-origin Home Secretary in the newly-unveiled Boris Johnson Cabinet.

Ms. Patel had been a prominent member of the ‘Back Boris’ campaign for the Conservative Party leadership and was widely tipped for the plum post in his frontline team.

“It is important that the Cabinet should represent modern Britain as well as a modern Conservative Party,” she said, just hours before her appointment was announced.

A long-standing Eurosceptic, Priti Patel had steered the Vote Leave campaign in the lead up to the June 2016 referendum in favour of Britain’s exit from the European Union (EU).

The 47-year-old was first elected as a Conservative MP for Witham in Essex in 2010 and gained prominence in the then David Cameron led Tory government as his Indian Diaspora Champion.

She went on to be appointed to junior ministerial posts, Treasury minister in 2014 and then Employment Minister after the 2015 General Election, before Theresa May promoted her to Secretary of State in the Department for International Development (DfID) in 2016 until she was forced to resign the post in 2017.

“With Boris Johnson leading the Conservative Party and as Prime Minister, the United Kingdom will have a Leader who believes in Britain, will implement a new vision for the future of the country and a roadmap to move forward and thrive as a self-governing nation that re-establishes our ties with our friends and allies around the world such as India, she told PTI after Mr. Johnson won a landslide victory in the Tory leadership contest this week.

“He is committed to securing new and improved trading relationship with our friends in India and ensuring that the values we share — the rule of law, democracy, and dynamic entrepreneurial spirit should be at the heart of one of our most important partners on the global stage, said Ms. Patel, who has been a champion of India-UK ties since her time as Indian Diaspora Champion.

The Gujarati-origin politician, who is a prominent guest at all major Indian diaspora events in the UK, is seen as a avid supporter of Prime Minister Narendra Modi in the UK.

As a member of the UK Parliament’s influential Foreign Affairs Committee (FAC), she was part of the team that recently released its damning report warning that the UK was falling behind in the race to engage with India at the end of a lengthy Global Britain and India parliamentary inquiry.

“Our report calls for the government to look again at the relationship between the UK and India,” Ms. Patel said, in reference to the ‘Building Bridges: Reawakening UK-India ties’ report released last month to mark the first-ever India Day in the UK Parliament.

“This should be a special relationship based upon the living bridge between our two great countries and a partnership we should be nurturing. The report covers many of the missed opportunities where the UK should be proactively and bilaterally enhancing our ties. We are soon to have a new PM in the UK, which will provide a welcome change in how we engage India’s re-elected PM Modi, she said at the time.

She once again returns as the senior-most British Indian member of the UK Cabinet, having been forced to resign in November 2017 as International Development secretary amid a scandal over allegedly failing to disclose meetings with officials in Israel without informing the UK Foreign Office.

She had maintained it was a private visit and Boris Johnson, then UK foreign secretary, spoke out at the time to back her.

Describing Ms. Patel as a “good friend” with whom he worked closely together for Global Britain, he had said it was “quite right that she meets with people and organisations overseas”.

But Ms. Patel was effectively sacked by Theresa May, forcing her to the Parliament backbenches from where she continued to voice her criticism of Ms. May’s Brexit plan.

She was among the rebel Tory MPs who consistently voted against the former Prime Minister’s Withdrawal Agreement with the EU as a bad deal for Britain, which ultimately sealed Ms. May’s term as Prime Minister.

Former interior minister Sajid Javid is to take over from Philip Hammond as finance minister in his first cabinet appointment, while Brexit hardliner Dominic Raab to be Britain’s foreign secretary.

Mr. Javid, a former banker from a modest background, was a contender for the premiership but endorsed Mr. Johnson when he failed to get enough support from fellow Conservative MPs. Mr. Raab, 45, who was also named as Mr. Johnson’s effective deputy, resigned as Brexit minister in Theresa May’s government last year saying the divorce deal she struck with Brussels offered too many compromises.

Australia’s Qantas on October 20 completed the first non-stop commercial flight from New York to Sydney, which was used to run a series of tests to assess the effects of ultra long-haul flights on crew fatigue and passenger jetlag. The Boeing 787 Dreamliner touched down in Sydney early on October 20 morning after a flight […]

The UK government on Thursday announced that its current social distancing measures will remain in place for at least another three weeks, going up to May 7, as the country’s death toll from the coronavirus pandemic rose by a further 861 to hit 13,729. UK Foreign Secretary Dominic Raab, who is standing in for British […]

Of temples, windmills and solar parks

Set amid a concrete jungle, bright lights, and free flowing traffic, Beijing West Station, at night, is usually crammed with passengers. At the gates, travellers queue up, and after the customary frisking and baggage screening, they head into the main corridor, leading into departure gates. From there, platforms and trains can be conveniently accessed. Prior […]