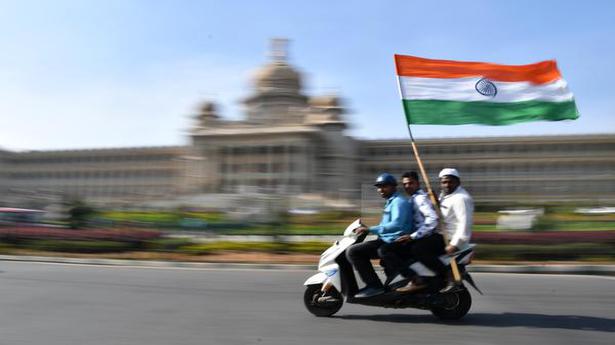 Pro-Pakistani elements have infiltrated the anti-CAA protests in the US to execute their hidden agenda against India, an Indian-American community leader has said.

During a recent protest against the CAA in Washington DC, posters were seen reflective of the presence of pro-Pakistani elements.

Not only this, at least two Pakistani-Americans were among the main organisers of the anti-CAA protests in Washington DC on Sunday, claimed Indian-American community leader Adapa Prasad.

The Citizenship Amendment Act (CAA) came into force in India last December amid protests in India and around the world.

The Indian government has stressed that the new Act does not deny any citizenship rights but has been brought in to protect the oppressed minorities of neighbouring countries and provide them citizenship.

“Darakshan Raja, a Pakistani-American activist who also co-ordinates Kashmiri separatist protests in Washington DC area along with another Pakistani-American Muslim activist named Khudai Tanveer, were one of the main coordinators of the anti-CAA protests,” Mr. Prasad told PTI.

Mr. Prasad and his team shared videos and pictures of the individuals from the anti-CAA protests in Washington DC, which was attended by more than 500 Indian-Americans from in and around the city.

“This in English means we easily got Pakistan, now we will fight out to get India,” he said as he shared the picture of the said poster.

“This is disgusting. Pro-ISI and pro-Pakistani elements are using this protest to execute their hidden agenda which is depicted in their own poster,” Mr. Prasad said.

He said the protests are also being misused by pro-Khalistani activists to push their agenda.

“Arjun Sethi, a pro Khalistani activist, was also amongst the coordinators of the anti-CAA rally,” Prasad said.

Mr. Sethi had recently testified before a Congressional Committee on Kashmir.

In recent weeks, some of the Indian-Americans, during private conversation in WhatsApp groups, had expressed apprehensions that their anti-CAA protests could be misused by elements close to ISI and Pakistan.

There had been moments during which the organisers of these protests had increased scrutiny of those trying to lead the anti-CAA protests.

“It could be a trap to portray Indians and Indian Muslims in a negative light by someone, Mike Ghouse, an Indian-American who is the president of Washington DC-based Center for Pluralism, said in a recent blog.

Some of the eye witnesses told PTI that the “Hindustan Pakistan” poster written in Urdu were withdrawn quickly after it came to the notice of some of the organizers.

Data: An age and gender-wise breakdown of Nobel laureates from 1901 to 2019

American scientist John B. Goodenough, 97, who shared the Chemistry Nobel this year, is the oldest laureate ever. Interestingly, this year also saw Esther Duflo, 47, share the Economics Nobel, the youngest-ever in that category. An analysis of the age and gender of 923 Nobel laureates* Charting the laureates The graph depicts the age and […]

Apple removed a smartphone app that allows Hong Kong activists to report police movements from its online store on October 10 after an official Chinese newspaper accused the company of facilitating illegal behavior. Apple became the latest company to come under pressure to take Beijing’s side against anti-government protesters when the Communist Party newspaper People’s […]

Japan’s government apologised Wednesday to tens of thousands of victims forcibly sterilized under a now-defunct Eugenics Protection Law, which was designed to “prevent the birth of poor-quality descendants,” and promised to pay compensation. Chief Cabinet Secretary Yoshihide Suga said he was offering “sincere remorse and heartfelt apology” to the victims. It came after the Parliament […]