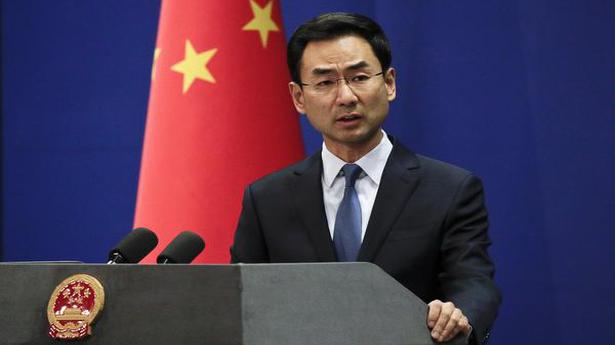 Citing “some progress” on the issue of listing of the Pakistan-based Jaish-e-Mohammad chief Masood Azhar as a terrorist at the UN Security Council, China indicated on Tuesday that it was willing to change its decade-old stand opposing the move.

“The relevant consultations are going on within the committee and have achieved some progress,” said Chinese Foreign Ministry spokesperson Geng Shuang, adding that he believed the issue of Azhar’s listing, which was put on hold by Beijing on March 13, “can be properly resolved.”

Diplomatic sources confirmed to The Hindu that Masood Azhar could be placed on the UNSC’s 1267 Committee’s list of sanctioned individuals and entities as early as Wednesday, once China formally intimated its decision to lift the hold, which it placed on a proposal initiated by the U.S., the U.K, and France after the Pulwama attack in February this year.

A UN diplomat in New York told The Hindu that a silence period (during which objections may be raised), which kicked off on April 23, would end at 9 a.m. (New York time) on May 1.

The UNSC 1267 panel last met to discuss the designation of Masood Azhar as a terrorist on April 23, when China and the U.S. disagreed on when the listing would go through, the diplomat said.

While China wanted to hold off on the decision until mid-May, the U.S. did not want to wait beyond April 23 to wrap up the process to list Azhar.

Asked specifically about a newspaper report that the listing would be done on May 1, Mr. Geng said, “China is still working with the relevant parties and we are in contact with all relevant parties within the 1267 Committee and I believe with the efforts of all parties, this will be properly resolved.”

The Ministry of External Affairs did not comment on the report, as an official said the government would “wait for the decision” before making any statement.

The listing of Masood Azhar, who’s organisation JeM was listed in 2001, has been pending for more than a decade.

This is the fourth attempt by countries at the UNSC and India to bring Azhar under UN sanctions . China had vetoed each of the previous proposals citing it had not received enough evidence against Azhar, who was released in 1999 during the IC-814 hijacking in exchange for hostages.

Diplomatic sources said China’s turnaround came after Foreign Secretary Vijay Gokhale’s visit to Beijing last week, where India shared details of all the evidence on Masood Azhar, including links to the February 14 Pulwama attack for which the JeM had claimed responsibility. American, British and French diplomats had been pursuing the case with China, even threatening to bring the listing proposal to the entire UNSC for a vote if China refused to relent.

On Friday, British High Commissioner to India Dominic Asquith said he was “optimistic” that the proposal would go through shortly.

In an interview on Monday, Pakistan Foreign Ministry spokesman Mohammad Faisal said Pakistan was “willing to discuss the listing”, but rejected evidence of Azhar’s links to the Pulwama attack.

(With inputs from Atul Aneja in Beijing)

A global shortage of condoms is looming, the world’s biggest producer said, after a coronavirus lockdown forced it to shut down production. Malaysia’s Karex Bhd makes one in every five condoms globally. It has not produced a single condom from its three Malaysian factories for more than a week due to a lockdown imposed by […]

China’s Wuhan city, the epicentre of the Coronavirus outbreak, said on Friday it had revised up its total coronavirus death toll by 1,290, admitting that many cases were “mistakenly reported” or missed entirely, according to state-run CCTV. Also read: China sat on coronavirus pandemic news for six days The adjustment, detailed in a social media […]