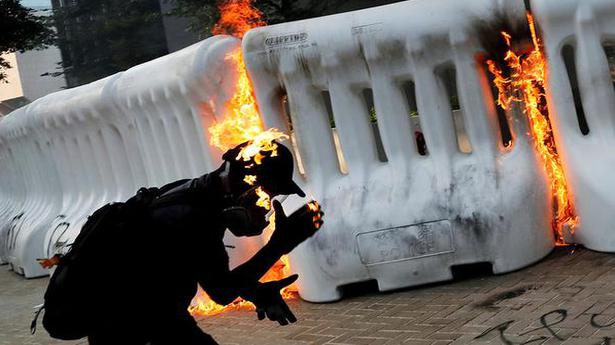 Pro-democracy protesters rallied outside Britain’s consulate in Hong Kong on Sunday, demanding London do more to protect its former colonial subjects and ramp up pressure on Beijing over sliding freedoms.

Hundreds of demonstrators sang “God Save the Queen” and “Rule Britannia” outside the consulate, waving the Union Jack as well as Hong Kong’s colonial-era flags.

The protest came as another large rally made its way through the city streets on Sunday afternoon in defiance of a ban by police, who warned the gathering was illegal.

“We have a right to go to protests, to the streets, and we have to voice our demands to the government,” a secondary school student at the rally who gave his name as Alvin, said.

But the rally descended into violence when small groups of hardcore activists — known within the movement as “braves” — tried to attack the city’s main government complex. Police fired tear gas and deployed water cannon trucks after Molotov cocktails and rocks were thrown over security barriers surrounding the complex, which has become a frequent flashpoint in the ongoing protests.

The once-stable international hub has been convulsed by weeks of huge, sometimes violent rallies calling for greater democratic freedoms and police accountability.

The movement is the biggest challenge to China’s rule since the city was handed back by Britain in 1997 and shows no sign of ending, with local leaders and Beijing taking a hard line. Under a deal signed with Britain ahead of the city’s handover to China, Hong Kong is allowed to keep its unique freedoms for 50 years.

Two people were injured in a massive explosion at a Tata Steel plant in the United Kingdom on Friday. The steel plant is located in Port Talbot, South Wales. Tata Steel in Europe confirmed on Twitter that two of their employees were “slightly injured” in the accident. “We can confirm two of our employees were […]

Turkish forces and their Syrian allies seized large parts of the northern Syrian town of Suluk in a new advance against the Kurdish-led Syrian Democratic Forces (SDF), the Syrian Observatory for Human Rights monitoring group said on Sunday, October 13, 2019. Suluk is located around 10 km (six miles) from the Syrian-Turkish border, to the […]

Infosys to settle visa violation case in California for $800,000

Tech major Infosys will pay California a sum of $800,000 to settle visa related allegations. Attorney General, State of California Department of Justice, Xavier Becerra said an $800,000 settlement was announced against Infosys and its BPM (business process management) subsidiary. Some 500 Infosys employees were working in the state on Infosys-sponsored B-1 visas rather than […]