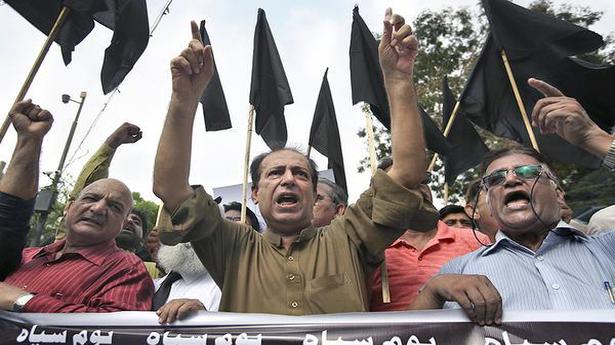 On July 16, the official Twitter handle of the ruling Pakistan Tehreek-e-Insaf (PTI) sparked off a fresh debate on censorship under the present regime when it sent out a dozen tweets on media ethics, using the hashtag #JournalismNotAgenda.

The content of the tweets confirmed that PTI’s media managers have a murky understanding of state, citizenship, media and the complementary way they function in a democracy, said political analyst Salman Zaidi, speaking to The Hindu. “Whether or not these tweets represent the Prime Minister’s views… the PM is not known to rein in federal Ministers when they behave like trolls,” he said.

Pointing out that many of the statements tweeted invoked “defence and security”, Mr. Zaidi said that with an increased securitisation of the public sector apparatus, fundamental freedoms were being defined in terms of security.

“Dictatorships upend media freedoms, and the PTI may want to think about the legacy it builds as a party seeking re-election. Not only are the ‘directives’ issued in the name of security rather childish, they come from a party whose own track for mudslinging, defaming, name-calling and irresponsible statements is rather well known,” he said.

Underscoring that some of the tweets were misunderstood by journalists, Muhammad Kamran, operations head of the PTI’s official social media team, told The Hindu that the government’s aim was to engage media in a “productive and constructive discussion”.

“We will never stand for curbs on media but yes, we do feel that some journalists only talk about specific agenda, use specific language. We feel that journalists should tell the truth and not follow an agenda… This hashtag wasn’t for journalists but for those with agendas…” added Mr. Kamran.

However, journalist Benazir Shah told The Hindu that such tweets are not just “irresponsible,” they are outright “dangerous” and put reporters and news organisations at risk. “Recently, similar messages targeting the freedom of press have come from other state organisations as well. Those in Pakistan who still care about an independent and free press, and their right to information, should be concerned about the PTI’s authoritarian impulses,” she said.

Senior journalist Ahmad Noorani told The Hindu that the tweets were posted to harass journalists, make them fall in line and to give a message to party followers that they shouldn’t trust certain journalists critical of the establishment.

“They fear that such critical journalistic work can expose failures of the party and can also push minds of party workers to think rationally. PTI supporters have a history of attacking media houses and journalists and PTI trolls are known for their abusive and threatening tweets and posts against media houses in general and against individual critical journalists in particular.” He added that he was not sure whether the Twitter onslaught was ordered by the party’s top leadership, though PTI’s official Twitter handle was used. “I know for a fact that not all Twitter and Facebook accounts introducing themselves as of PTI are being run by PTI supporters.”

Mr. Kamran said the party had two kinds of tweeters. “One, who are members of our team, who sign our code of conduct… We monitor them so we know that they don’t do anything unethical. The other set is of supporters who are not in our control.”

A ruling by a US judge granting bond on Friday to a former Twitter employee accused of spying for Saudi Arabia was stayed after US prosecutors said that they appealed the decision. Magistrate Judge Paula McCandlis, of the US District Court in Seattle, granted Ahmad Abouammo, 41, bond with travel restrictions while he awaited trial. […]

Russia’s Defence Ministry on Monday rubbished a report in The New York Times that claimed its warplanes bombed four hospitals in rebel-held territory in Syria over a period of 12 hours this year. The May strikes — which the newspaper tied to Moscow through Russian radio recordings, logs and witnesses — are part of a […]