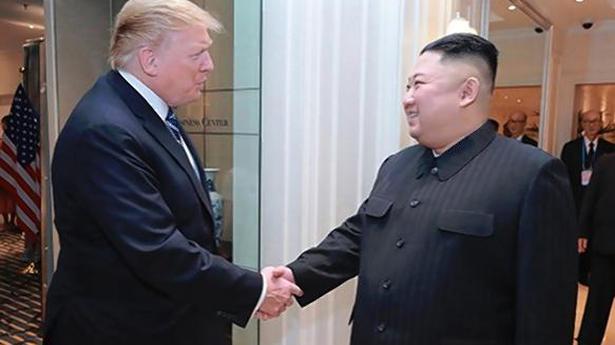 North Korean state media acknowledged a fruitless summit between its leader Kim Jong-un and U.S. President Donald Trump for the first time on Friday, saying people were blaming the United States for the lack of an agreement. Mr. Trump however was open to more talks with North Korea aimed at North Korea’s denuclearisation, his National Security Adviser said, despite reports that it is reactivating parts of its missile programme.

“The public at home and abroad that had hoped for success and good results from the second DPRK-U.S. summit in Hanoi are feeling regretful, blaming the U.S. for the summit that ended without an agreement,” Rodong Sinmun, the newspaper of the North’s ruling Workers’ Party, said in a commentary.

A senior State Department official said on Thursday that no one in the U.S. administration advocated the incremental approach that North Korea has been seeking and the condition for its integration into the global economy and a transformed relationship with the United States was complete denuclearisation.

Iran’s President Hassan Rouhani has demanded that Pakistan act “decisively against anti-Iranian terrorists” in a phone call with the country’s Premier, Tehran said, a month after a bloody attack on security forces. Iran says a Pakistani suicide bomber was behind the February 13 attack that killed 27 Revolutionary Guards in its volatile southeastern province of […]

What is the Belt and Road Initiative, and why is China pushing it hard?

The story so far: Six years ago, Chinese President Xi Jinping launched a mammoth infrastructure project straddling many countries and continents. Of the projects, the most ambitious is the $60+ billion China-Pakistan Economic Corridor, aimed at linking China’s Xinjiang province with the Arabian Sea. What is it? The Belt and Road Initiative (BRI), also known […]

Sri Lankan intelligence officials were tipped off about an imminent attack by Islamist militants hours before a series of suicide bombings killed more than 300 people on Easter Sunday, three sources with direct knowledge of the matter said. Three churches and four hotels were hit by suicide bombers on Sunday morning, killing 321 people and […]