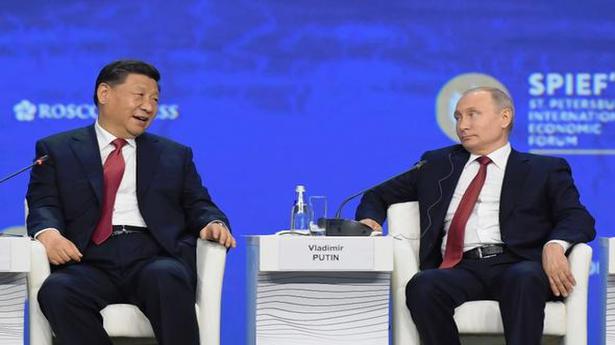 China’s Xi Jinping and Russia’s Vladimir Putin hit back at U.S. global economic dominance on Friday as they took the stage together at Russia’s showcase business forum.

With China embroiled in a trade war with Washington and Russia under Western sanctions, Mr. Xi and Mr. Putin lashed out at “inequalities” in the global economic system and vowed to pursue closer ties between their countries.

Mr. Putin, speaking in front of political and business leaders at the annual St. Petersburg International Economic Forum, accused Washington of seeking to “extend its jurisdiction to the whole world”.

Denouncing the “rhetoric of trade wars and sanctions”, Mr. Putin called for rethinking the role of the U.S. dollar in global trade and slammed U.S. pressure against Chinese technology giant Huawei. “They are attempting not just to squeeze but to unceremoniously push (Huawei) out of the global market,” Mr. Putin said.

Mr. Xi said steps needed to be taken to “overcome inequalities” in the global economic system, adding: “The aspirations of nations toward a better life cannot be stopped.” Pointing to Russia as a key partner, he said China was looking to build “beneficial cooperation on the basis of equality and mutual respect” with friendly countries. “China is ready to share technological inventions with all partners, in particular 5G technology,” Mr. Xi said.

Mr. Xi arrived in Moscow on Wednesday for a three-day visit with Mr. Putin and described the Russian leader as his “best friend” during a cosy meeting at the Kremlin.

The trip comes five years after Moscow’s annexation of Ukraine’s Crimea peninsula led to a serious rift with the West and a move towards Russia’s neighbour to the east.

China meanwhile is locked in a trade war with the United States that has seen Washington impose sweeping duties and move to blacklist companies like Huawei.

Moscow and Beijing’s economic ties have grown in recent years, though they remain heavily weighted in favour of China, which dwarfs Russia in economic and demographic terms.

Mr. Xi’s visit has seen the signing of dozens of commercial contracts in e-commerce, telecoms, gas and other areas. Other deals have been signed at the forum, including one on Friday between Russian and Chinese shipping companies to work together to develop Arctic sea routes.

While this is the Chinese leader’s first appearance at the economic forum, where he heads a 1,000-strong delegation, he and Putin have met regularly in recent years.

The partnership is yielding increasing trade, which grew by 25 percent in 2018 to hit a record $108 billion, he said.

But despite political tensions and repeated rounds of sanctions over Moscow’s actions in Ukraine, the European Union remains by far the biggest foreign investor in Russia — well ahead of China and the US.

“China is taking time to ramp up investments in Russia,” said Charles Robertson, chief economist at Renaissance Capital. “It wants to feel secure about the long term, it doesn’t want to rush into it.”

He predicted China would make big investments over the next three to five years, possibly even sooner, as Russia plays an important role in projects along Beijing’s New Silk Road.

The first day of the forum on Thursday saw Putin make a pitch for increased foreign investment as Russia looks to revive an economy hit by Western sanctions over Ukraine and the drop in oil prices.

After emerging from recession in 2017, the Russian economy ticked up by only 0.5 percent in the first quarter of this year.

Putin, whose approval ratings have dropped to record lows, has vowed to boost growth through a series of “national projects” — ranging from healthcare to infrastructure — that will cost Russia $388 billion.

But foreign investors, already wary of Russia’ volatile business climate, were further spooked by the arrest on fraud charges in February of US businessman Michael Calvey, the founder of one of the oldest private equity firms focusing on Russia.

He denies the charges, saying the arrest was the result of a shareholder dispute.

In a statement through his lawyers on Friday, Calvey regretted that he had been unable to attend this year’s forum.

“He expressed regret that it will apparently not be possible for him to attend SPIEF for reasons that are beyond his control,” the statement said, with Calvey also thanking the business community “for its remarkable solidarity and support”.

The siege at the Polytechnic University on the Kowloon peninsula appeared to be nearing an end with the number of protesters dwindling to a handful, days after some of the worst violence since anti-government demonstrations escalated in June. Police chief Chris Tang, who took up the post this week, urged those remaining inside to come […]

U.S. President Donald Trump on Monday said he will be meeting the prime ministers of India and Pakistan soon, even as he maintained that tension between the two Asian countries had lessened. While Mr. Trump will address Indian-Americans, along with PM Modi, at the ‘Howdy Modi!’ event in Houston on September 22, the American President […]

Around 17,000 passengers were stranded overnight at Tokyo’s Narita Airport, an official said Tuesday, after it took a direct hit from a powerful typhoon that caused transport chaos throughout the capital. The typhoon caused more than 100 flights to be scrapped and road and rail links to the airport were also badly affected, leaving many […]