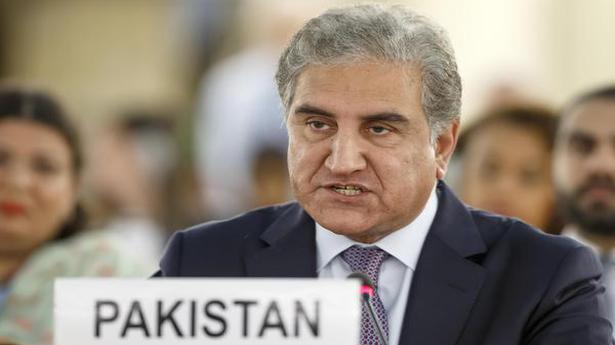 Foreign Minister Shah Mahmood Qureshi has written to the United Nations Secretary General and President of the U.N. Security Council highlighting Pakistan’s legal case on the Jammu and Kashmir issue.

The Foreign Office (FO) said in a statement on September 25 that the letter, along with a detailed fact sheet and comprehensive annexures, highlighted the “illegal, unilateral, coercive” Indian actions of August 5.

The Indian government revoked the special status given to Jammu and Kashmir and bifurcated it into two Union Territories.

Mr. Qureshi, in his letter to U.N. chief Antonio Guterres and UNSC President Vasily Nebenzya, said “Indian action is aimed at bringing about a demographic change” in Kashmir.

He said “India wanted to preempt the U.N.-administered plebiscite” envisaged under numerous U.N. Security Council Resolutions to ascertain the wishes of the Kashmiri people to join Pakistan or India.

The FO said that the letter not only builds on Pakistan’s efforts to sensitise the international community about the alleged human rights violations in Kashmir but also presents its comprehensive position on the Jammu and Kashmir issue.

It also contained the relevant U.N. Security Council resolutions, bilateral agreements and letters to the U.N. in a sequential manner, laying out the international law and Pakistan’s legal case on the issue.

In line with the Prime Minister Imran Khan’s commitment to the Kashmiri people, the Foreign Minister’s letter is part of Pakistan’s ongoing diplomatic efforts to sensitise the international community to the plight of innocent Kashmiris, the FO said.

It said that India’s actions in Kashmir were a threat to regional peace and stability and hold hostage peace and development on South Asia.

Pakistan will continue to extend political, moral and diplomatic support to the Kashmiri people, the statement said, ahead of Khan’s address to the U.N. General Assembly on Friday.

The British government suffered a further political defeat on Monday night, as MPs voted to wrest control of the Brexit timetable from the government on Wednesday, to hold a series of indicative votes to attempt to determine what course of action could command a majority in Parliament. The MPs voted by 329 to 302 in […]

Flag-draped Iranian women watched a FIFA soccer match from inside a Tehran stadium on Thursday, the first time they’ve been freely allowed into a stadium in decades. The 2022 World Cup qualifier between Team Melli and Cambodia at Tehran’s Azadi Stadium marks a decades-long push by Iranian women to be able to watch matches, something […]