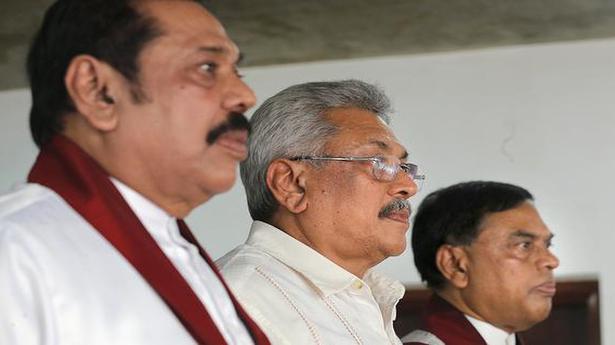 Following months of speculation, former President Mahinda Rajapaksa’s political camp appears to have come closer to finalising the candidate for the presidential race later this year. Gotabaya Rajapaksa, former Defence Secretary and a younger brother of the ex-President, is very likely to represent the clan and its followers, political sources told The Hindu.

Though there has been no official announcement in this regard, a top political source said the family has now come to an understanding on the matter. “A decision was reached at a recent dinner meeting held at the former President’s residence last week,” the source said on Monday. “They think it is premature to name the candidate now since we have at least a few months until elections,” the source familiar with the discussions said, requesting anonymity.

Mr. Gotabaya’s potential candidature signals the family’s comeback bid in the country’s national politics, after losing the presidential poll in 2015. The former Defence Secretary has applied to denounce his U.S. citizenship, as Sri Lankan law prevents dual citizens from contesting. Mr. Rajapaksa cannot contest elections to the top office, as a 2015 legislation disallows a third term.

Mr. Gotabaya has been focussing on strengthening his own political base over the last two years. Meanwhile, Basil Rajapaksa, another brother of the former President, has been working on building a new party — the Sri Lanka Podujana Peramuna (SLPP) or People’s Front.

The party, with Mr. Rajapaksa as its de facto leader, made significant gains in the local authority elections held in early 2018. The polls saw the Sri Lanka Freedom Party (SLFP), one of the two traditional mainstream parties of the country in which the former President began and built his political career, pushed to a distant third position. Subsequently, the fragmented SLFP weakened further, with a some of its members defecting to the new party.

The SLPP and the SLFP are currently exploring a possible alliance in the presidential poll, but with the SLFP maintaining that it would field President Maithripala Sirisena, it remains to be seen if the party will back Mr. Gotabaya.

Mr. Gotabaya, 69, remains a controversial figure in Sri Lankan politics, especially among minority Tamils and Muslims. He is currently fighting multiple court cases in which he is charged with large-scale corruption. In March 2017, Sri Lanka’s Criminal Investigations Department (CID) told a magistrate court in March 2017 that Mr. Gotabaya directed a top-secret death squad which targeted journalists and dissidents, news agency AFP reported. He has denied the allegations. The media and civil society have in the past accused him of overseeing the infamous ‘white-van abductions’ during the war and soon after. The former defence secretary has denied having a role in the enforced disappearances.

Further, Mr. Gotabaya has in the past been associated with hard-line Buddhist group Bodu Bala Sena that is notorious for inciting anti-Muslim violence.

His supporters, on the other hand, see him as a ‘doer’ and ‘strong leader’ , often pointing to his role in “ending the war”, and efforts in urban development, which was subsumed into the Defence Ministry during his time as secretary. Expressing his interest in entering politics earlier, Mr. Gotabaya once remarked that he was studying Donald Trump as a model.

Boy from isolated Amazon tribe dies of COVID-19 in Brazil

A Yanomami indigenous boy has died after contracting COVID-19, authorities in Brazil said on Friday, raising fears for the Amazon tribe, which is known for its vulnerability to disease. The 15-year-old boy, the first Yanomami to be diagnosed with the virus, was hospitalised a week ago at an intensive care unit in Boa Vista, the […]

An Iranian-flagged oil tanker pursued by the US amid heightened tensions between Tehran and Washington changed its listed destination to a port in Turkey early Saturday after Greece said it wouldn’t risk its relations with America by aiding it. The crew of the Adrian Darya 1, formerly known as the Grace 1, updated its listed […]