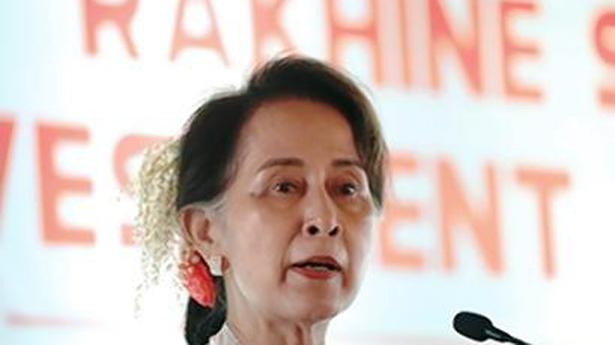 An ethnic guerrilla army in Myanmar said some of the several dozen soldiers, police and civilian officials it abducted from a ferry were killed in a subsequent attack by government helicopters.

A statement posted on Sunday on the website of the Arakan Army, a rebel group in the western state of Rakhine, said three helicopters attacked three boats carrying the captured personnel after they were seized on Saturday, sinking two.

It said some captives and members of its guerrilla force were killed. The claim could not immediately be confirmed.

An Information Ministry statement said earlier that 58 people had been abducted by about 30 Arakan Army members from the boat carrying 165 civilian passengers and about 50 government personnel from Rakhine’s capital, Sittwe, north to Buthidaung.

A statement issued on Sunday night on the website of Myanmar’s military commander-in-chief acknowledged dispatching helicopters to try to rescue the abductees.

It said the helicopters suffered some damage from gunfire and a crewman was lightly wounded, while at least 14 people who had been kidnapped were rescued. The report did not specifically refer to an attack on boats or casualties among the abductees.

The Arakan Army says it is seeking self-determination. It represents the Buddhist Rakhine inhabitants of Rakhine state, and is one of more than a dozen ethnic minorities in Myanmar seeking autonomy.

The military in 2017 waged a brutal counterinsurgency campaign against the Muslim Rohingya minority in Rakhine, causing more than 7,00,000 people to flee to neighbouring Bangladesh.

The army and other security forces were accused of major abuses, including organized rape, murder and the burning of villages, that a UN-appointed investigation has called ethnic cleansing.

The Arakan Army has been especially aggressive in its attacks and has active alliances with several other armed ethnic rebel groups, helping it keep the government off-balance by staging joint attacks in other areas of the country.

In August, it staged coordinated attacks with allies at five locations, including a military academy outside normal combat areas, where a civilian was killed and a soldier wounded.

The alliance with the Ta’ang National Liberation Army, representing the Palaung minority, and the Kokang minority’s Myanmar National Democratic Alliance Army claimed responsibility for the attacks in in Myanmar’s central Mandalay region in Northern Shan state, where 14 people were reported killed.

Since becoming independent from Britain in 1948, Myanmar has been wracked by fighting with minority groups in border areas seeking greater autonomy from the central government.

Hurricane Dorian, one of the most powerful Atlantic hurricanes on record, weakened slightly early on Tuesday as it remained stalled over Grand Bahama Island, the Miami-based National Hurricane Center (NHC) said. Dorian has been pounding the Bahamas for days, killing at least five people in the Abaco Islands in the northern Bahamas and inundating homes […]

Brazilian president Jair Bolsonaro has canceled a planned trip to the World Economic Forum in Davos this year, presidential spokesman Otavio Rego Barros told reporters on January 8. Mr. Barros said security concerns were a factor in the decision, but denied any connection with recent events in West Asia, adding that unspecified “political and economic […]

Official: Man jumps to his death at Grand Canyon Skywalk

Authorities are trying to locate the body of a man who climbed over a safety barrier at the Grand Canyon Skywalk and apparently jumped to his death. They say the 28-year-old visitor to the tourist spot on the Hualapai reservation outside Grand Canyon National Park jumped around 4-30 p.m. on September 29. A Grand Canyon […]