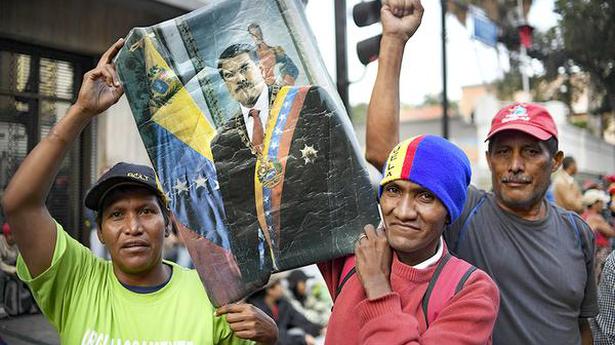 Demonstrators clashed with police on the streets of the Venezuelan capital on Tuesday, spurred by Opposition leader Juan Guaidó’s call on the military to rise up against President Nicolás Maduro — who said he had defeated an attempted coup.

Tuesday evening, Mr. Maduro declared victory over the uprising — congratulating the armed forces for having “defeated this small group that intended to spread violence through putschist skirmishes.”

“This will not go unpunished,” Mr. Maduro said in an address broadcast on television and the radio. “(Prosecutors) will launch criminal prosecutions for the serious crimes that have been committed against the Constitution, the rule of law and the right to peace.”

Mr. Guaidó had been immediately backed by the United States, where President Donald Trump said in a tweet Washington was standing behind the Venezuelan people and their “freedom.”

He rallied his supporters with an early morning video message that showed him — for the first time — with armed troops he said had heeded months of urging to join his campaign to oust Mr. Maduro.

The 35-year-old National Assembly leader was filmed outside the La Carlota air base, where he asked the armed forces inside to join him. The video had the extra shock value of featuring key Opposition figure Leopoldo López at his side, saying soldiers had released him from years of house arrest.

Mr. López later entered the Chilean embassy with his wife and one of his children to claim asylum, before moving to the Spanish embassy, Chile’s Foreign Minister Roberto Ampuero announced in Santiago.

Soldiers backing Mr. Guaidó wore blue armbands to demonstrate their all egiance to the Opposition leader but there appeared to be few of them.

Brazil said later a number of Venezuelan troops had sought asylum at its Caracas Embassy. Brazilian media put that number at 25.

But Mr. Maduro had called on his forces to show “nerves of steel” and troops in riot gear, backed by armored vehicles and water tankers, lined up against the demonstrators. Several vehicles plowed into the crowd, injuring some of the protesters. Rioters later blocked the highway with a bus and set it on fire. A plume of black smoke rose from an area near a helicopter hangar on the base, where demonstrators who briefly managed to enter were pushed back.

Meanwhile, U.S. Secretary of State Mike Pompeo said on Wednesday that the administration of President Trump was prepared to take military action to stem the crisis in Venezuela.

“The President has been crystal clear and incredibly consistent. Military action is possible. If that’s what’s required, that’s what the United States will do,” Mr. Pompeo said on Fox Business Network.

“But the President has made clear in the event that there comes a moment — and we will all have to make decisions about when that moment is and the President will ultimately have to make that decision — he’s prepared to do that if that’s what’s required.”

Iran has had the highest number of deaths from coronavirus outside China, where it originated, and several officials have been infected – including the head of Iran’s emergency medical services, ILNA news agency reported on Tuesday. Eight per cent of Iran’s parliament has been tested positive for coronavirus, according to a CNN report. Lawmaker Abdul […]

The review also found that the university accepted more than $9 million from Epstein during the decade leading up to his conviction Source: thehindu.com Related

US President Donald Trump on Wednesday signed a bill in support of the pro-democracy protestors in Hong Kong, despite stern warnings by China that it would retaliate with “countermeasures” if the legislation became law, as it meddles with Beijing’s domestic affairs. The Hong Kong Human Rights and Democracy Act, 2019, became a law, a week […]