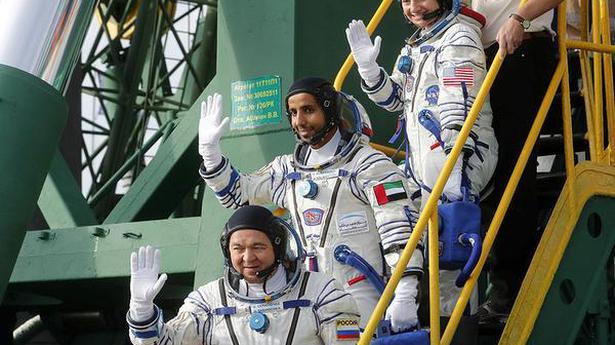 A Soyuz rocket blasted off on Wednesday from the Baikonur space centre in Kazakhstan carrying an Emirati who will make history as the first Arab on the International Space Station.

Hazzaa al-Mansoori of the United Arab Emirates is accompanied by Russia’s Oleg Skripochka and NASA astronaut Jessica Meir. Mr. Mansoori tweeted before the launch that he was “filled with this indescribable feeling of glory and awe”.

“Today I carry the dreams and ambition of my country to a whole new dimension. May Allah grant me success in this mission,” he said.

The day before the launch, he said he would record his prayer routine on the ISS and broadcast it to people on Earth.

“As a fighter pilot I already prayed in my aircraft,” he said, explaining that he had experience of prayers at high speed.

Mansoori plans to conduct experiments and said he would take Emirati food with him to share with the crew.

Skripochka, first-time flyer Meir and Mansoori will join a six-member crew on the ISS and for a brief period of time the ISS will be home to nine astronauts.

At a pre-flight conference, Meir, 42, said the crew communicated by using “Runglish” – a mixture of Russian and English.

“We still need to work on our Arabic,” she joked.

Russian Orthodox priests blessed the spacecraft ahead of the launch, in a traditional prayer service often held before Russian rocket launches.

Mansoori is set to return to Earth with NASA’s Nick Hague and Russian cosmonaut Alexey Ovchinin on October 3. Skripochka and Meir are set to remain on the ISS until the spring of 2020.

The International Space Station — a rare example of cooperation between Russia and the West — has been orbiting Earth at about 28,000 kilometres (17,000 miles) per hour since 1998.

Russia is resolved to keep its position as a leader of the space industry, particularly for manned space flights.

A powerful magnitude 7.7 earthquake struck in the Caribbean Sea between Jamaica and eastern Cuba on Tuesday, shaking a vast area from Mexico to Florida and beyond, but there were no immediate reports of casualties or heavy damage. The quake was centered 139 kilometers (86 miles) northwest of Montego Bay, Jamaica, and 140 kilometers (87 […]

A 57-year-old Indian-origin Sikh taxi driver has been brutally assaulted and hit with a barbeque grill cover in the head in front of his home in the US state of California, media reports said, second such attack in less than a fortnight. Baljeet Singh Sidhu, who works as a mail carrier and a Uber driver, […]