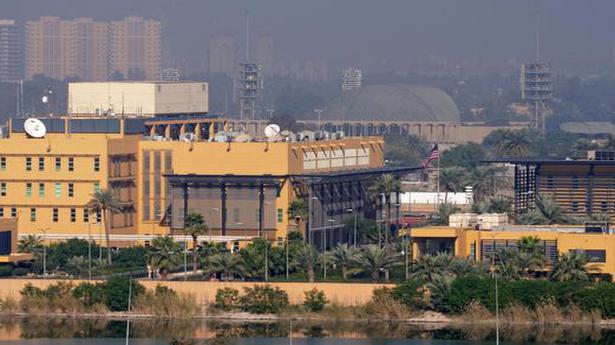 A volley of rockets landed near the U.S. Embassy in the Iraqi capital Baghdad on Sunday, two security sources told AFP, in the latest unclaimed attack on American installations in the country.

Reporters heard loud thuds emanating from the western bank of the Tigris, where the U.S. Embassy and most other foreign diplomatic missions are located. One security source said three Katyusha rockets hit near the high-security compound while another said as many as five struck the area.

Later Iraq’s Security Forces said in a statement that five rockets hit the high-security Green Zone with no casualties. It did not mention the U.S. Embassy. The rocket fire comes two day after thousands massed in Baghdad in response to a call by populist cleric Moqtada Sadr for a rally to demand the ouster of U.S. troops from Iraq.

America’s military presence has been a hot-button issue in Iraq since a U.S. strike killed Iranian general Qasem Soleimani and a top Iraqi commander outside the Baghdad airport on January 3. Around 5,200 U.S. troops are in Iraq to lead a global coalition fighting the Islamic State group, but Iraq said the strike against Soleimani violated that mandate.

Sunday’s attack was the latest in a series of rocket fire this month targeting the Green Zone, where the Iraqi Parliament is also located. The Parliament earlier this month urged the departure of U.S. troops from Iraq, which has been gripped by anti-government protests since October.

David Beasley quoted a study published last week that said the global wealth of billionaires climbed from $8 trillion at the start of April to $10.2 trillion in July this year. Source: thehindu.com Related

Five former police officials were sentenced to death by a Bangladesh court on Monday for opening fire on a motorcade of then Opposition leader Sheikh Hasina in 1988 that killed her 24 supporters during an anti-government rally. The court in southeastern Bangladesh’s Chittagong city handed down the verdict on Monday after the completion of the […]

Pakistan’s ailing former prime minister Nawaz Sharif on November 19 left for London in an air ambulance for medical treatment for multiple diseases after the Lahore High Court allowed him to travel abroad for four weeks and rejected the Imran Khan government’s condition of furnishing an indemnity bond. Sharif, 69, is accompanied by his younger […]