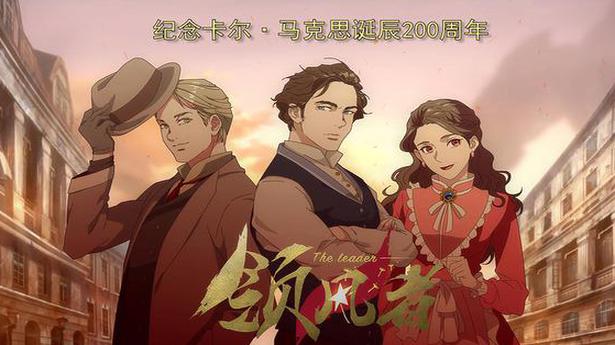 The Chinese Communist Party is trying a new way to woo younger people, commissioning an anime series whose hero is clean-shaven, slim and a hopeless romantic — Karl Marx.

Called The Leader, the online cartoon series is designed to make Marx more palatable to China’s younger generation, which usually encounters the bearded German philosopher through thick textbooks and classes.

“There is a lot of literary work about Karl Marx, but not as much in a format that young people can accept,” Zhuo Sina, one of the scriptwriters behind the online series, said.

“We wanted to fill this gap,” she added. “We hope more people can have a more positive understanding of and interest in Marx and his biography.”

Created by animation studio Wawayu but backed by China’s propaganda department and the State-run Marxism Research and Construction Programme Office, the release of The Leader comes as the Chinese Communist Party ramps up its push for ideological rigour — especially in classrooms and on university campuses.

With its Ferrari-driving elites cashing in on an economic boom that has revolutionised China since the economy was opened to market forces in 1978, Beijing’s allegiance to Marx may seem like an anomaly.

But the Communist Party is still loyal to its ideological forefather.

Students start learning the theories of Marx and Lenin in middle school, and civil servants — even journalists in state-run media — have to take mandatory courses in Marxist theory to secure promotions.

Last year, Chinese President Xi Jinping also urged party members to cultivate the habit of reading Marxist classics and regard it as a “way of life” and “spiritual pursuit”.

That also means that the scriptwriters of The Leader have had to compromise some aspects of storytelling for the sake of accuracy, said Zhuo. “You can’t just write whatever,” she emphasised.

As humans retreat into their homes as more and more countries go under coronavirus lockdown, wild animals are slipping cover to explore the empty streets of some of our biggest cities. Also read: Coronavirus outbreak revives calls to stop wildlife trade Wild boar have descended from the hills around Barcelona while sika deer are nosing […]

Sudan’s military says one of its aircraft has crashed in the western Darfour region on Thursday evening, killing all 16 people on board. The military says several officers were among those killed when the plane went down in the restless region of West Darfour, which has recently witnessed deadly ethnic clashes. The plane, a Russian […]