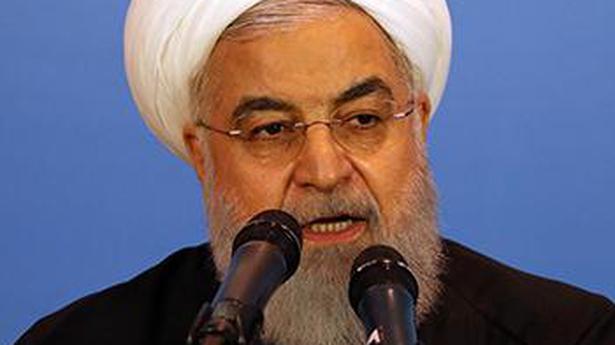 President Hassan Rouhani called on Saturday for unity among Iran’s political factions to overcome conditions which he said may be harder than those during the 1980s war with Iraq, state media reported, as the country faces tightening U.S. sanctions. U.S. President Donald Trump on Thursday urged Iran’s leaders talk with him about giving up their nuclear programme and said he could not rule out a military confrontation.

“Today, it cannot be said whether conditions are better or worse than the (1980-88) war period, but during the war we did not have a problem with our banks, oil sales or imports and exports, and there were only sanctions on arms purchases,” Mr. Rouhani said, according to the state news agency IRNA.

“The pressures by enemies is a war unprecedented in the history of our Islamic revolution… but I do not despair and have great hope for the future and believe that we can move past these difficult conditions provided that we are united,” Mr. Rouhani told activists from various factions.

Separately, a media court on Saturday suspended the weekly Seda (Voice), the semi-official news agency ISNA reported, after the reformist magazine published an issue that included articles warning about the possibility of war with the United States.

“At the Crossroads of War and Peace, have moderates lost or will they again save Iran from war?” the main headline on the front page read against a photograph of U.S. Navy warships.

On social media, hardliners attacked the magazine as “Trump’s voice”, suggesting its warning about the danger of war amounted to a call for talks with the United States.

A report on a deadly apartment block fire in London condemned the London Fire Brigade and concluded that fewer people would have died if the building were evacuated more quickly. Britain’s Press Association said the leaked report, which was to be published Wednesday, also accused brigade Commissioner Dany Cotton of “remarkable insensitivity” for testifying that […]

High school students in Hong Kong added gas masks, goggles and hard hats to their formal white uniforms as they participated in a strike Monday on the first day of school to show their commitment to the city’s fiery anti-government protest movement. The nearly three months of youth-dominated protests calling for democracy and an independent […]