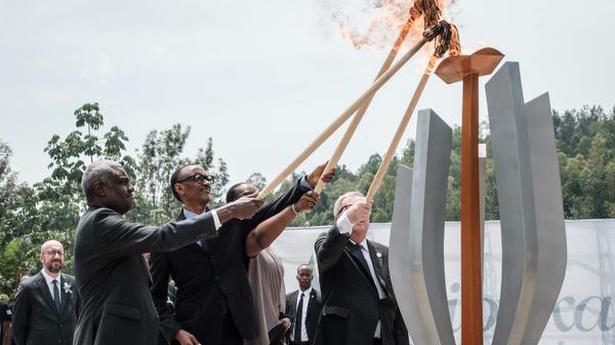 President Paul Kagame said on Sunday that Rwandans had become a family again, 25 years after more than 8,00,000 people were slaughtered in a genocide that shocked the world.

Mr. Kagame lit a remembrance flame at the Kigali Genocide Memorial, where more than 2,50,000 victims are believed to be buried, mainly from the minority Tutsi people, as the country began its annual 100 days of mourning that coincide with the length of the slaughter.

They are only some of those killed by the genocidal Hutu forces, members of the old army and militia forces called the “Interahamwe”, that began their bloody campaign of death on April 7, 1994, the day after the assassination of President Juvenal Habyarimana, a Hutu. Some were shot; most were beaten or hacked by machetes.

“In 1994, there was no hope, only darkness. Today, light radiates from this place … How did it happen? Rwanda became a family once again,” Mr. Kagame said. “The arms of our people, intertwined, constitute the pillars of our nation. We hold each other up. Our bodies and minds bear amputations and scars, but none of us is alone. Together, we have woven the tattered threads of our unity into a new tapestry,” he said.

Mr. Kagame was speaking at the Kigali Convention Centre, a dome-shaped auditorium in the centre of the capital, a modern building emblematic of the regeneration of Rwanda.

“Our people have carried an immense weight with little or no complaint. This has made us better and more united than ever before,” Mr. Kagame said.

The killings lasted until Mr. Kagame, then 36, led the mainly Tutsi Rwandan Patriotic Front (RPF) into Kigali on July 4, ending the slaughter and taking control of the devastated country.

All nine people on board a small medical evacuation plane were killed on Sunday when the aircraft crashed into a resort area south of the Philippine capital Manila and exploded in flames, officials said. The light plane crashed into a resort compound in Pansol village in Laguna province near the foothills of Mount Makiling. Police […]

South Korean firms will make their first shipment of coronavirus tests to the United States this week after a request by President Donald Trump, Yonhap news agency reported Monday. Also | Interactive graphic tracking global spread of coronavirus – WHO The U.S. has more confirmed COVID-19 cases than anywhere else in the world and also […]