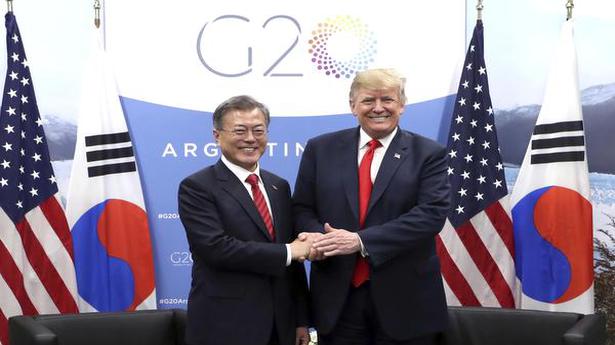 It would be their first meeting since Mr. Trump’s second summit with North Korean leader Kim Jong Un in Vietnam last month. Their talks collapsed due to disputes on U.S.-led sanctions on the North, and North Korea recently threatened to quit the nuclear diplomacy.

The White House and Moon’s office said Mr. Moon and his wife will visit the United States on April 10-11 and Mr. Moon will meet Mr. Trump at the White House to discuss developments on North Korea and bilateral issues.

The White House in its statement said the alliance between the U.S. and South Korea “remains the linchpin of peace and security on the Korean Peninsula and in the region.”

Earlier this month, North Korean Vice Foreign Minister Choe Son Hui said her country has no intention of compromising or continuing the nuclear talks unless the United States takes steps commensurate with those the North has taken, such as its moratorium on missile launches and weapons tests, and changes its “political calculation.” She said Kim would soon decide whether to continue the talks and the moratorium.

North Korea later withdrew its entire staff at a liaison office with South Korea before sending some of them back to the office at the North Korean border town of Kaesong. North Korea hasn’t provided any reason for its action. Some experts say North Korea still hopes to keep diplomacy with the United States alive.

The death toll in a landslide that buried more than a dozen village houses in southeastern Myanmar has climbed to 56, an official said Monday. The landslide hit a village in Paung township on Friday. Zaw Zaw Htoo, a member of parliament from Paung who arrived at the scene over the weekend, said three more […]

Brazil on Monday rejected aid from G7 countries to fight wildfires in the Amazon, with a top official telling French President Emmanuel Macron to take care of “his home and his colonies.” “We appreciate (the offer), but maybe those resources are more relevant to reforest Europe,” Onyx Lorenzoni, chief of staff to President Jair Bolsonaro, […]

A series of bombings struck restaurants and public squares on Monday in the eastern Afghan city of Jalalabad, wounding at least 66 people, officials said, as the country marked the 100th anniversary of its independence. No group has claimed responsibility for the blasts 10 bombs but both Islamic State (IS) and the Taliban militants operate […]