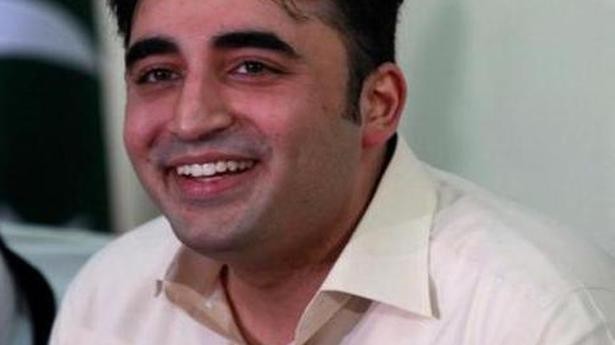 Opposition leader Bilawal Bhutto Zardari on Tuesday demand the sacking of three ministers in the Imran Khan-led Pakistan government who he said backed “banned outfits” and their training camps, even as the ruling PTI accused him of portraying the country in a “negative light”. Mr. Bilawal, Chairman of the Pakistan Peoples Party (PPP) has been pressing the government of Prime Minister Khan to dismiss the ministers who backed terror outfits amidst intense international pressure on Pakistan to rein in the militant outfits operating in the country after the Pulwama terror strike.

“The government has responded to my demand to sack ministers associated with banned outfits by declaring me anti-state, issuing death threats & National Accountability Bureau (NAB) notices.

“None of this deters us from our principle stand; form joint NSC parliamentary committee & act against banned outfits,” he tweeted.

“I demand a joint parliamentary committee for implementation of National Action Plan and removal of all three federal ministers for their connection with the extremist organisations. If our demands are not met we would not support the government over any move,” said Mr. Bilawal.

The three federal ministers are “hands-in-glove” with the terrorists. I don’t want to disclose their names, but will do so if the government fails to take action against them,” he said last Thursday.

During the weekend, Mr. Bilawal raised the issue while addressing the PPP’s Sindh leaders while chairing the party’s provincial council meeting.

He demanded the removal of three federal ministers for their alleged connections with the banned outfits and accused Khan’s Pakistan Tehreek-e-Insaf (PTI) of winning general elections in 2018 with the help of proscribed organisations.

He warned the government that it will not get any support from the PPP on any move if it did not take serious action against such elements within its ranks and implement the National Action Plan (NAP) with true spirit.

On Tuesday, PTI leaders hit back at Mr. Bilawal after he again demanded sacking of the ministers who he claimed were associated with the banned outfits.

PTI Senator Faisal Javed, reacting to the allegations, said Mr. Bilawal was “busy in portraying Pakistan in a negative light”.

“Bilawal should be ashamed of trying to please anti-Pakistan elements. He should tell the nation whose language he has been speaking,” he said.

“Pakistan has emerged as a symbol of peace for the world,” Mr. Javed claimed.

Finance Minister Asad Umar, when asked by a reporter what he thought of the allegations, said that the parties that supported him during election campaigns “have themselves been victims of terrorism as well.”

“There has been a policy of making excuses for a long time now… If he [Bilawal] doesn’t believe in this policy then he should change it,” the close aide of Prime Minister Khan was quoted as saying by Geo News.

Kurdish forces in northeastern Syria left several positions along the long border with Turkey on Thursday, complying with a deal that sees Damascus, Ankara and Moscow carve up their now-defunct autonomous region. Russian forces have started patrols along the flashpoint border, filling the vacuum left by a U.S. troop withdrawal that effectively handed back a […]

With no clear end to the crisis in sight, Air France will get 3 billion euros in direct loans from the French state and a 4-billion-euro bank loan guaranteed by the state, the airline said in a statement. Source: thehindu.com Related

Indonesian President Joko Widodo said on March 2 two Indonesians had tested positive for SARS-nCOV after being in contact with an infected Japanese national, marking the first confirmed cases in the world’s fourth most populous country. The two had been hospitalised in Jakarta, Mr. Widodo told reporters at the presidential palace in the capital. The […]