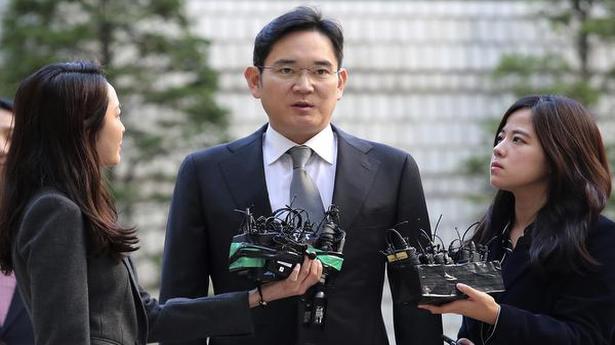 Billionaire Samsung scion Lee Jae-yong appeared in court on Friday for his retrial on the corruption allegations that partially fueled the explosive 2016 scandal that spurred massive street protests and sent South Korea’s then-president to prison.

“I feel deeply sorry for worrying many people,” Lee said while soaking up a barrage of camera clicks before walking into the Seoul High Court with his lawyers. He didn’t answer questions about the prospects of a jail term or how that would affect Samsung’s business. Some protesters shouted “Arrest Lee Jae-yong” from behind.

The Supreme Court in August had ordered the retrial after concluding the amount of bribes Lee was accused of providing to ex-President Park Geun-hye and her confidante had been underestimated in a previous ruling that kept the Samsung Electronics vice chairman out of jail on a suspended sentence.

While Lee apparently faces an increased possibility of serving jail time in the retrial, it’s unclear what that would mean for Samsung, the world’s largest manufacturer of computer chips, smartphones and TVs.

Some experts say a jailed Lee would hurt Samsung’s decision-making process at a critical time as the company grapples with instability in the semiconductor market and ramifications from the trade war between the United States and China.

Others say Samsung showed no signs of trouble during the 11 months Lee spent in jail until February last year and that prison terms have never stopped South Korean corporate leaders from relaying their management decisions from behind bars.

Lee’s case, which highlights a culture of corruption between South Korean business groups and politicians, could take months and even years if he or the prosecutors appeal again to the Supreme Court.

Lee was initially sentenced to five years in prison in 2017 for offering 8.6 billion won ($7 million) in bribes to Park and her longtime confidant Choi Soon-sil while seeking government support for his attempt to solidify his control over the Samsung business empire.

Lee was freed in February 2018 after the Seoul High Court reduced his term to two-and-a-half years and suspended his sentence, overturning key convictions and shaving the bribe total by more than a half.

In sending the case back to the High Court, the Supreme Court said the amount of bribes Lee offered had been undervalued. It said the money Samsung spent to purchase three racehorses used by Choi’s equestrian daughter and fund a winter sports foundation run by Choi’s niece should also be considered bribes.

Some legal experts say Lee could be sentenced to another term in jail if convicted for an elevated amount in bribes, which prosecutors claim were embezzled from Samsung’s corporate coffers.

But while a slew of South Korean corporate leaders has been convicted for corruption, business irregularities and other crimes over the years, they often received relatively light punishment with judges often citing ramifications to the country’s economy.

Former Conservative Minister Sam Gyimah has joined the pro-European Union Liberal Democrat party, barely a week after being expelled from the Conservative grouping in parliament over his opposition to Prime Minister Boris Johnson’s Brexit plans. Mr. Gyimah was one of 21 Conservative legislators kicked out of the parliamentary party after they voted to block Mr. […]

Fugitive Saudi sisters to apply for asylum in Georgia

Georgian immigration officers have visited two Saudi sisters who pleaded for international help after fleeing the ultra-conservative kingdom and will help them apply for asylum, an official said on Thursday. The two women had issued pleas for international protection on a Twitter account called @GeorgiaSisters, saying they were “trapped in Georgia” after Saudi authorities cancelled […]