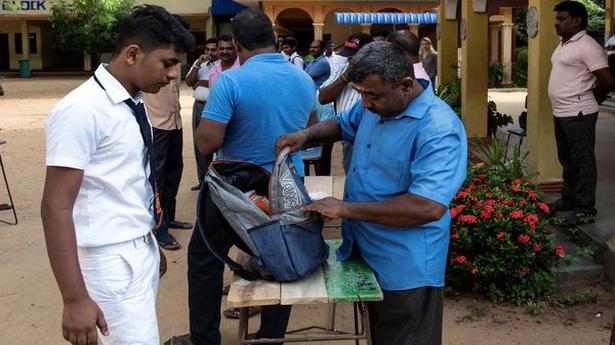 Amid tight security, the classes commenced for mid-to-upper stream (grades 6 to 13) and will be followed by lower grades (1 to 5) on May 13.

Nine suicide bombers, including a woman, carried out a series of devastating blasts that tore through three churches and three luxury hotels on April 21, killing 253 people and injuring over 500 others.

Following the attack, the authorities closed the schools until further notice.

Despite the tight security arrangements, most classrooms were near empty. Private schools, including Catholic institutions, remained closed.

The attendance of teachers was also low, the report said.

An extensive security programme has been implemented in schools. Special circulars have been issued by the Education Ministry about the security of the schools.

Children will have to carry transparent or see-through school bags, lunch boxes and water bottles.

Parking vehicles near schools have been completely banned. Separate places have been prepared to park school vans, buses. Special search operations will also be conducted from Sunday in schools.

Sri Lanka banned the NTJ and arrested over 100 people in connection with the blasts.

Sri Lanka has imposed a state of emergency since the attacks and given sweeping powers to soldiers and police to arrest and detain suspects for long periods.

House-to-house searches are being carried out across the country looking for explosives and propaganda material of Islamic extremists.

Catholic bishops gathered at a special Vatican assembly called on Pope Francis on Saturday to open the priesthood to married men in the Amazon, as well as giving women a greater role to play and making damaging the environment a sin. The bishops issued a list of recommendations at the close of a three-week “synod” […]