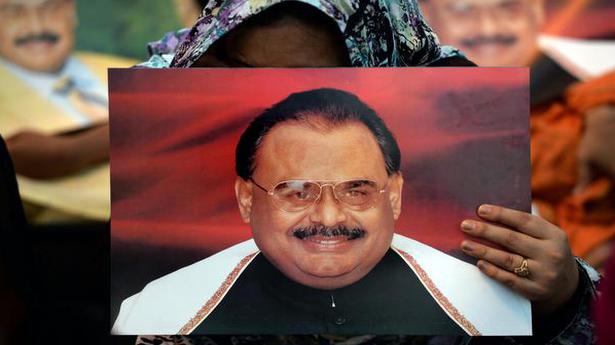 Scotland Yard on Thursday charged the Muttahida Qaumi Movement (MQM) founder Altaf Hussain, living in exile in the U.K., with an offence of encouraging terrorism in connection with a speech relayed to followers in Pakistan.

The Metropolitan Police Counter-Terrorism Command said Hussain will appear before the Westminster Magistrates’ Court in London charged under Section 1(2) of the U.K.’s Terrorism Act 2006 with encouraging terrorism.

Hussain (65), requested asylum in the 1990s and later gained the U.K. citizenship. But he maintains a firm grip over the MQM – one of Pakistan’s biggest political parties – and its main power base, the financial capital of Karachi.

He had delivered a fiery speech on August 22, 2016, after which his party workers vandalised a media office in Karachi and chanted anti-Pakistan slogans. The MQM supremo had not only raised slogans against Pakistan but also called the country “a cancer for entire world“.

“On August 22, 2016, [he] published a speech to crowds gathered in Karachi, Pakistan, which were likely to be understood by some or all of the members of the public to whom they were published as a direct or indirect encouragement to them to the commission, preparation or instigation of acts of terrorism and at the time he published them, intended them to be so encouraged, or was reckless as to whether they would be so encouraged, the Met Police said in a statement.

Hussain, who is based at Mill Hill in north London, had been arrested on June 11 on suspicion of intentionally encouraging or assisting offences contrary to Section 44 of the Serious Crime Act 2007 and was released on bail until the charge this week.

The Met Police had earlier said that throughout the investigation, officers had been liaising with Pakistani authorities in relation to their ongoing enquiries.

The MQM was founded in 1984 as the party of Muhajirs or Urdu-speakers who migrated from India at the time of Partition in 1947. The party has dominated politics in Karachi for three decades because of its support in the densely populated working class neighbourhoods of Urdu-speaking Muhajirs.

In his latest address in August, Hussain said that Pakistan’s civil and military establishments have been misleading and duping the masses of the country over the issue of Kashmir for the past 72 years.

Norway, which says it has the new coronavirus under control, on Monday started opening up pre-schools after a month-long closure, an AFP correspondent reported. Authorities have said the reopening was possible because children have been less affected by COVID-19, although some parents have expressed reservations over the decision. “Going to pre-school is safe,” Education Minister […]