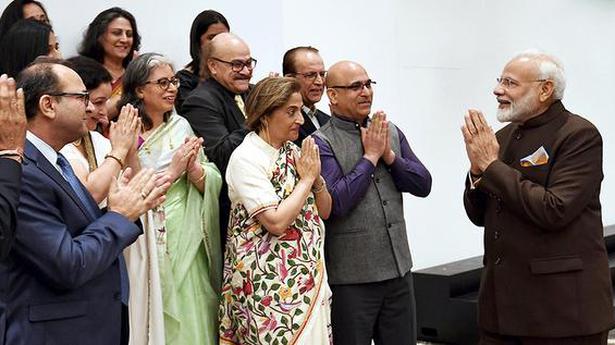 Prime Minister Narendra Modi requested Indians leaving across the world on Sunday to send at least five non-Indian families to India as tourists every year.

Addressing a gathering of members of the Indian community here, he said, “Can you do something for me? It is a small request. I am saying this to all Indians leaving all over the world. You take a decision that every year, each one of you will send at least five non-Indian families to India as tourists.”

The Prime Minister said this after unveiling the plaque of the groundbreaking ceremony for the Eternal Gandhi Museum here, inauguration of the Gujarati Samaj of Houston Event Centre and a Siddhi Vinayak temple.

“The Eternal Gandhi museum will be a prized cultural landmark in Houston. I have been associated with this effort for a while. It will surely make Gandhi Ji’s thoughts popular among the youth: PM,” the PMO said in a tweet.

Mr. Modi also thanked the Indian community in Houston for setting the stage for a “glorious future” of Indo-US ties, it said in another tweet.

State BJP president B.S. Yeddyurappa startled the party rank and file on Sunday by saying that efforts were on to divide the Veerashaiva Samaja by sowing seeds of discontent on caste lines. Addressing party workers and leaders in the city, he urged them and members of the community to ignore such attempts. “I want to […]

TDP candidate from Mangalagiri Assembly constituency and IT Minister Nara Lokesh took a jibe at the record of pending cases against YSRCP chief Y.S. Jagan Mohan Reddy. He took to twitter on Saturday and wrote: “YS Jagan’s resume of crimes submitted to the election commission reads like a crime novel. The entire nation trended #JaganCriminalAffidavit […]