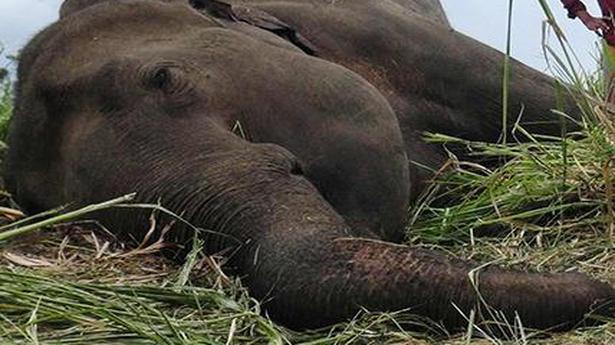 As many as seven elephants have been found dead in the north-central part of Sri Lanka, prompting wildlife authorities to launch a probe into what they say appears to be a case of poisoning.

“We suspect that the animals have been poisoned. We are conducting post-mortem examinations to establish the cause of their death,” said Chandana Sooriyabandara, Director General of the Wildlife Department. On Friday, locals who found elephant carcasses in Habarana, in Anuradhapura district, alerted authorities and by Saturday, the toll went up to seven. All of them were female elephants, Mr. Sooriyabandara told The Hindu.

The area surrounding Habarana is among the main elephant habitats of the country, adjoining the Minneriya National Park and Polonnaruwa. Sri Lanka currently has an elephant population of nearly 5,500 and the authorities’ suspicion that the seven elephants were poisoned has raised alarm over a heightening human-animal conflict in the island. Official data points to nearly 300 elephant deaths in 2018 due to electrocution, railway track accidents, ‘hakka patas’ or traps made of explosives, and gunshots. Animal welfare activists also criticise the use of elephants in temple processions. Earlier this week, Tikiri, the skinny 70-year-old elephant that sparked a social media uproar after being forced to take part in an annual Buddhist pageant, died.

Experts consider the loss of seven elephants this week a serious blow to the country’s elephant population. All seven animals found dead were said to have been 10 to 15 years old, “in the prime of their lives”, according to Jayantha Jayawardena, managing trustee of the Biodiversity and Elephant Conservation Trust, an NGO.

“It takes 22 months for an elephant to give birth to a calf and usually, elephants take a four to five-year break before conceiving again,” he said. Much of the conflict, in his view, arises as villagers’ homes have been built on corridors that elephants use for internal migration. “Elephants generally walk about 12 miles a night to find food on the way. Now, when they find paths blocked by these house, they break in and then stumble upon crops. It is like a buffet for them,” explained Mr. Jayawardena, who has been studying Asian elephants for 40 years. All the same, he argues that while the villagers’ actions against the animals might seem harsh, they were “fully justified”. “No villager would like to see an elephant killed, but when the animal damages their crops, they are affected badly.”

“They lose their entire income, what can they do,” he said, suggesting that the animal and the villagers were both victims.

“The government has to engage with the villagers, and relocate them in areas that are better, and provide them suitable housing and livelihoods. Otherwise this human-elephant conflict will just carry on.”

High winds have toppled trees, grounded planes and left thousands of South Korean homes without electricity as Typhoon Lingling brushed up against the Korean Peninsula. South Korea’s safety ministry said on Saturday that strong winds and rain caused power failures in some 17,000 homes in the southern resort island of Jeju and southern mainland regions. […]

Several people tried to help the surfer and fought off the shark before taking the injured man to shore at Salt Beach in South Kingscliff, police said. Source: thehindu.com Related

A shooter killed three family members at a home in a small Wisconsin town, then went to a residence in a nearby community and opened fire on more people, sheriff’s officials said Monday. The shootings some 14.5 km apart in northwestern Wisconsin left a total of five people dead, including the suspect, and two others […]