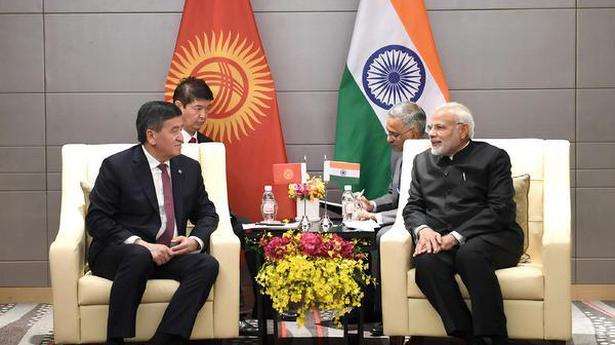 Without naming Pakistan, China on Monday said that the global campaign against terrorism under the framework of the Shanghai Cooperation Organisation (SCO) must be stepped up, but the intent is not to target any specific country.

“In every summit, the institutional building of the SCO will be discussed that would involve economic cooperation and security cooperation, particularly on counter-terrorism,” China’s Vice-Foreign Minister Zhang Hanhui said, ahead of President Xi Jinping’s visit to Bishkek for the SCO summit that begins on Thursday.

But Mr. Zhang signalled that Pakistan should not become the focus of the counter-terrorism agenda under the SCO framework. “The establishment of the SCO is not to target any certain country but the summit of this level will certainly pay attention to major international relations and regional issues.”

Mr. Xi is expected to meet Prime Minister Narendra Modi on the sidelines of the summit. This would be the first meeting between the two leaders after Mr. Modi assumed office as Prime Minister for a second term after an impressive electoral victory in India’s general election which concluded last month. In a rare gesture, Mr. Xi extended his “heartfelt congratulations” to Mr. Modi for winning the general election, well before the announcement of official results.

On Pakistan, India and China appear to be pursuing competitive narratives. During a visit to Maldives — the first country that he visited after assuming office for a second time — Mr. Modi slammed “state sponsorship of terrorism” as the “biggest threat” facing the international counter-terrorism campaign.

“Terrorists do not own banks. They don’t have their own mints, nor armament factories. But neither money nor weapons seem to be in short supply for them. Where do they get these from? Who provides them the facilities they need?” Mr. Modi asserted.

But in the midst of the election campaign in India, China had agreed to designate Masood Azhar, the head of the Pakistan based terror group Jaish-e-Mohammed, as an international terrorist, meeting India’s long-standing and pressing demand.

While it has agreed to designate Azhar, following the Pulwama terror attack in February, China has maintained that it rejects targeting Pakistan as a state-sponsor of terrorism.

An official source, who did not wish to be named, told The Hindu, that after Azhar’s designation, China would expect that India begins to ease its pressure on Pakistan at the meetings of the Financial Action Task Force (FATF), where Islamabad has already been grey-listed. In case Pakistan enters the FATF’s black-list, it could face further international economic isolation, putting enormous strain on its already fragile economy.

The source pointed out that China would also “encourage” a resumption of dialogue between India and Pakistan, which are both members of the SCO.

Without losing focus on security, the SCO — a pan-Eurasian grouping pillared by the Russia, China, India and Pakistan along with Uzbekistan, Kazakhstan, Kyrgyzstan and Tajikistan – is expected to consolidate its economic flank during the Bishkek summit.

“Security and development are two major issues of focus for the SCO,” Mr. Zhang said.

Indian officials denied a British lawmaker entry on Monday after she landed at New Delhi’s Indira Gandhi International Airport, according to an accompanying aide. Debbie Abrahams, a Labour Party Member of Parliament who chairs a parliamentary group focused on Kashmir, was unable to clear customs after her valid Indian visa was rejected, the aide, Harpreet […]

An Australian senator was censured by his colleagues on Wednesday for seeking to blame the victims of last month’s mosque shootings and vilify Muslims. Sen. Fraser Anning was the target of widespread condemnation for blaming the attack in New Zealand on immigration policies. He faced more criticism later for physically striking a teenager who cracked […]

Switzerland on Tuesday summoned Sri Lanka’s Ambassador Karunasena Hettiarachchi and asked to see the “purported evidence” that Colombo says casts doubt on claims by a Swiss embassy staff member that she was abducted. Envoy Karunasena Hettiarachchi, who is based in Berlin, met Switzerland’s State Secretary Pascale Baeriswyl in Bern on Monday, a statement said. The […]