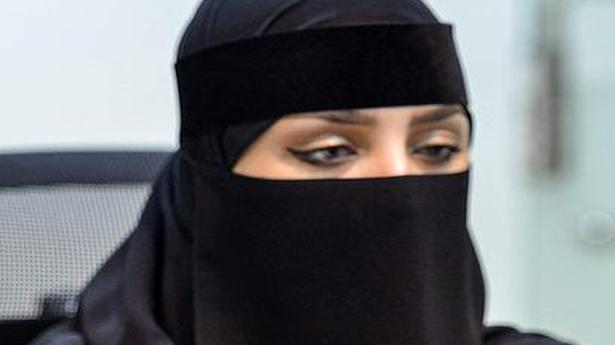 On board the national carrier of Saudia, the inflight magazine Leaders with its cover story on ‘Breaking Barriers’ displayed the photograph of a smiling Kariman Abuljadayel. The first Saudi woman athlete to take part in the Olympics 100 m sprint, Ms. Abuljadayel is now preparing for the 2020 Tokyo Olympics in rowing. In 2012, when the ban on Saudi women from competing in Olympics was lifted, her mother called her to the living room to watch the news being announced on television, according to the magazine. “Come On! It’s your turn next,” Ms. Abuljadayel’s mother told her.

We were flying to Riyadh as part of a global media delegation to attend the ‘Davos In the Desert’, or third edition of the Future Investment Initiative in Saudi Arabia. Riyadh hardly wears the festive look one finds in neighbouring Dubai. Shopping malls with fancy global luxury brands are lit up but not buzzing with customers. High-end SUVs zip past multi-lane streets which seem to have no concept of a pedestrian crossing. On one evening, to our question as to how to cross the street, a Saudi woman engaged in a phone conversation outside a mall quipped: “With Limousines!”

A skywalk designed like an airlines lounge was discovered at much distance, but clearly its existence was inconsequential to the locals given its dirty condition.

Riyadh is promising change. And a welcome sight signifying this are women driving fancy cars down the streets of the capital. The grant of freedom to Saudi women to drive alone by the de facto ruler and Crown Prince Mohammed bin Salman, popularly known as MBS, following prolonged protests by activists that made international headlines last year. In the ancient Salwa Palace of Al Diriyah, some 35 out of 53 tourist guides are women, who work in shifts.

Many of them have started driving their own cars. Nora, a young guide, says her family is supportive of the decision. “It is easier transportation for us to move from place to place. I used to take a taxi earlier.”

‘Come and see the change’

“There are more women starting to work. And thousands of girls are learning to drive now in schools. People have a wrong idea. Come to our Kingdom and see and I suppose they will change their mind,” she adds. Madi, another young tourist guide, is gearing up for licence exams and hopes she can drive to India one day.

Nidhi Sultan, a 21-year old student has travelled extensively to the U.S., Canada and Switzerland, and has a liberal worldview. The change in the Kingdom that has her most excited is about movie screenings in theatres now. With a giggle, she adds that it is her uncle who was double checking to ensure that she applied for a driver’s licence.

In many glitzy shopping malls, Saudi women clad from head to toe far outnumber the male employees even in evening shifts. Ninan, a sales executive, argued that the hijab is, in her opinion, a choice and reflects her culture. Another woman employee, though, was not sure if the ‘choice’ would be different were the Kingdom to make the Abaya, the loose over-garment, non-mandatory. Incidentally, there are restrictions for single Saudi men also in several public spaces marked as ‘Family’. But unrelated men and women working as colleagues walking together on the streets and chatting in some public areas are not a rare sight contrary to popular perceptions.

“Allowing men and women to share space in salons and gyms will be hard. But restaurants are mixing singles with families. We are improving. I am really happy with what is happening right now,” says Shahad Alobaid, a news producer. Rakan Abdullah, a journalist and an aspiring actor, argues that it is a misconception that Saudi Arabia has started empowering women only in the past year. “Believe it or not, it was the case before. Now, it is more exposed. In Saudi Arabia, like in India or Lebanon, there are people who are conservative as well as open-minded. And we respect all.”

MBS is widely seen as the man behind the changes. But he’s not free of criticism. The murder of dissident journalist Jamal Khashoggi last year is a blot on MBS’s projected image as a reformer. He’s also accused of repressing voices of dissent at home. But slow but significant progress is palpable for the Kingdom’s women citizens, who still have to deal with the repressive guardianship laws. In 2014, Somayya Jabarti became the Kingdom’s first ever woman editor when she joined Saudi Gazette. As we departed Riyadh, Ms. Jabarti was appointed as assistant Editor-In-Chief of Arab News. Clearly, the desert sands are shifting.

(Smita Sharma is a freelance journalist)

In what is likely to be an inflection point in the public impeachment inquiry into whether U.S. President Donald Trump violated his oath of office in his dealings with Ukraine, the U.S. Ambassador to the European Union, Gordon Sondland, on Wednesday testified that he was part of a pressure campaign on Ukraine, which was undertaken […]

South Korea on Wednesday said it was intensifying efforts to clean farms around the country as it scrambles to contain the spread of the highly contagious African swine fever that has ravaged farms near its border with North Korea. Lab tests on Tuesday night confirmed the country’s fifth case since last week from a farm […]

Text of rough transcript of Donald Trump’s conversation with the Ukrainian President, and why it’s not verbatim

The five pages released by the White House documenting President Donald Trump’s phone conversation with Ukrainian President Volodymyr Zelensky are not a word-for-word transcript of the call. A “CAUTION” note included at the bottom of the first page of the text released on September 25 explains that the rough transcript “records the notes and recollections […]