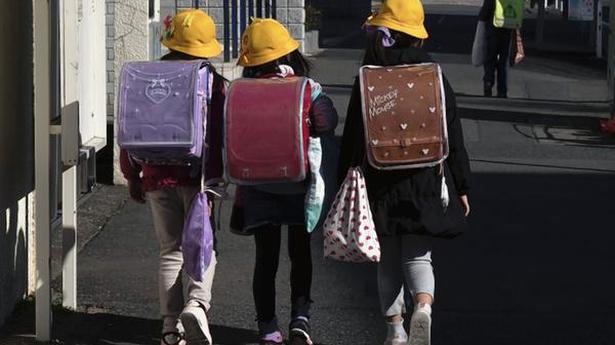 Japan’s Prime Minister Shinzo Abe on Thursday urged schools nationwide to close for several weeks to prevent the spread of the new coronavirus, as authorities reported the country’s fourth death linked to the outbreak.

The move comes as crew members from the Diamond Princess, a coronavirus-stricken cruise ship quarantined off Japan, began leaving the vessel, where more than 700 people have tested positive for the disease.

“The government considers the health and safety of children above anything else,” Mr. Abe said.

“We request all primary, junior high and high schools… across the nation to close temporarily from March 2 next week until their spring break.”

Local media said the call would not extend to nurseries and daycare facilities.

Many public elementary schools and junior high schools in northern Hokkaido, where the death of a man in his 80s infected with the virus was confirmed on Thursday, were already closed after a cluster of infections prompted the governor to request public schools close for about a week.

The city of Osaka also said it will close its kindergartens, elementary and junior high schools from Saturday for two weeks.

Mr. Abe’s call comes after the government urged organisers of major events to consider cancelling them, and called on businesses to allow employees to work from home.

Authorities have said the coming two to three weeks will be critical in determining whether they can stem the outbreak of the virus, which has infected nearly 200 people in the country.

Significant work to do, but Brexit deal possible: British PM

British Prime Minister Boris Johnson told his Cabinet on Sunday that a Brexit deal was still possible but that there was significant work to be done to reach one, a spokeswoman from his office said in a statement. “The Prime Minister updated Cabinet on the current progress being made in ongoing Brexit negotiations, reiterating that […]