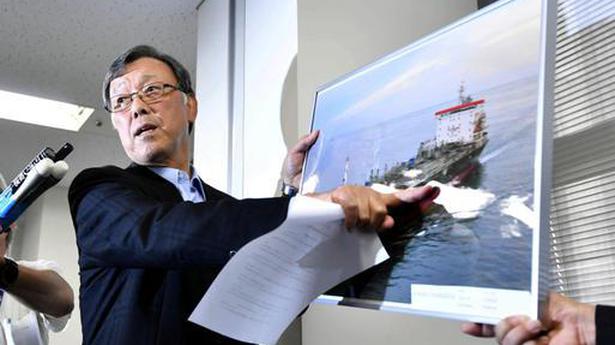 Two damaged tankers arrived safely on Sunday to locations off the Emirati coast after they were rocked by explosions in Gulf waters, in an incident Saudi Arabia blamed on its regional arch-rival Iran.

The Japanese-owned Kokuka Courageous was carrying highly flammable methanol through the Gulf of Oman on Thursday when it came under attack along with the Norwegian-operated Front Altair — the second assault in a month in the strategic shipping lane.

In his first public comments since the attacks, Saudi Crown Prince Mohammed bin Salman said in remarks published on Sunday that he would not hesitate to tackle any threats to the oil-rich kingdom. “We do not want a war in the region… But we won’t hesitate to deal with any threat to our people, our sovereignty, our territorial integrity and our vital interests,” he told pan-Arab daily Asharq al-Awsat. He said Iran had responded to a visit to Tehran by Japan’s Prime Minister Shinzo Abe “by attacking two tankers, one of which was Japanese”. Mr. Abe had been on an unprecedented visit to the Iranian capital in a bid to defuse tensions between Washington and the Islamic Republic when the attacks took place.

Japanese vessel Kokuka Courageous’s Singapore-based owner BSM Ship Management said in a statement on Sunday that it had “arrived safely at the designated anchorage” and that its crew were “safe and well”. A damage assessment and preparations for transferring the ship’s cargo would start once authorities had completed “security checks and formalities”, it added.

The other ship, the Front Altair, was under safe tow by tug boats towards an area off the coast of the eastern Emirati port of Fujairah. “First inspections are under way and no hot spots have been identified following the fire,” the vessel’s owners said in a statement Sunday.

It said all crew members were in Dubai, where they will “assist with the debrief to the owner’s legal team and the appropriate authorities, before returning home”.

Iran’s Parliament Speaker said on Sunday that Washington could have been behind the “suspicious” tanker attacks, the official news agency IRNA reported.

“The suspicious actions against the tankers… seem to complement the economic sanctions against Iran, considering that (the U.S.) has not achieved any results from them,” he told MPs.

The outbreak came just as South Korea has eased some social distancing restrictions and is seeking to fully reopen schools and businesses Source: thehindu.com Related

A 13-year-old suicide bomber blew himself up at a wedding early on Friday in eastern Afghanistan’s Nangarhar province, killing five people and injuring 11 others, police officials said. Among those killed was Malik Toor, a commander of a pro-government militia who had organised the wedding, police official Fayz Mohammad Babarkhil said. Officials said Toor was […]