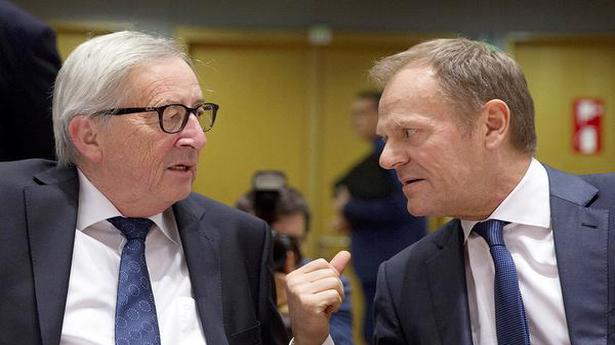 Britain’s political crisis continued to unfold on Wednesday as European Council President Donald Tusk said that a “short extension” to Article 50 would be conditional on a “positive vote in the House of Commons.”

The length of that conditional extension is yet to be determined, as the European Commission and the Council indicated their concerns about the U.K.’s proposal for an extension till June 30. Any extension beyond May 23, when European parliamentary election is due to take place, would pose “institutional difficulties and legal uncertainty”, they warned.

On Wednesday, Prime Minister Theresa May wrote to EU Council President Donald Tusk, seeking a short extension to Article 50 till June 30, and insisting that she would press ahead with another vote on her withdrawal deal next week.

It comes despite a ruling by the Speaker of the House of Commons, John Bercow, earlier this week that the same motion could not be put before the House repeatedly during the same parliamentary session and despite warnings from EU leaders that an extension would only be granted if the U.K. had clear and precise reasons as to why it should be given.

After details of the letter emerged, the Commission swiftly expressed concerns about the request. [European Commission President Jean Claude] “Juncker formally warned Theresa May against including a date for the extension that is after European Parliamentary elections. Withdrawal has to be before 23 May, otherwise we face institutional difficulties and legal uncertainty. Elections have to be held if extension is after May 23,” said Margaritis Schinas, the European Commission’s chief spokesperson.

“A short extension will be possible but it will be conditional on a positive vote on the withdrawal agreement in the House of Commons,” Mr. Tusk said, as he briefly stepped out of talks with EU leaders, ahead of a meeting of the European Council on Thursday at which the request for an extension is set to be discussed. While the suggestion of June 30 had its merits, it creates a “series of questions of a legal and political nature,” he said. “Leaders will discuss this tomorrow.”

During a heated session of Prime Ministers Questions, a defiant Ms. May had insisted that an extension that lasted longer than June 30 would require the U.K. to take part in EU parliamentary elections on May 23 (the new parliamentary session would open on July 2).

“I do not believe such elections would be in anyone’s interest. The idea that three years after voting to leave the EU they should be asked to elect a new set of MEPs [Members of European Parliament] would be unacceptable…This is the point the House has the decision to take as to what it wants the future to be…”

Labour leader Jeremy Corbyn slammed the government’s “incompetence, failure and intransigence”, and warned that the U.K. was in a “national crisis” and called for Ms. May to hold talks with the Labour party to find a route forward.

In the letter to Mr. Tusk, Ms. May asked the European Council to approve the supplementary documents outlining legally binding changes to the withdrawal deal that were agreed between Ms. May and European Commission President Juncker earlier this month.

She said this would enable the government to confirm changes to their proposition to Parliament, while they also intended to put further proposals to confirm previous commitments to protect the internal market given concerns about the backstop.

These additions would allow the government to bring the deal to Parliament again next week, and she was “confident” that Parliament would ratify the deal. “While we will consult with the Opposition in the usual way to plan the passage of the Bill quickly and smoothly as possible, the timetable for this is inevitably uncertain at this stage,” she wrote, asking for the extension.

Mr. Tusk said he was inclined to recommend the request relating to the approval of the supplementary documents as they could help the ratification process in the U.K. Were EU leaders to agree to a conditional extension, and were the withdrawal to be approved by the U.K. parliament next week, the extension could potentially be granted without a further meeting of the EU Council though one could be held if necessary.

“Even if the hope for final success may seem frail, even illusory and although Brexit fatigue is increasingly visible and justified we cannot give up seeking till the very last moment a positive solution,” Mr. Tusk said.

Britains’ Prince William and his wife Kate Middleton on Monday arrived in Pakistan amid tight security for their “most complex” tour to date, the first royal trip to the country in more than a decade. The royal couple — the Duchess of Cambridge in a long pale blue variation of the shalwar kameez, and the […]

President Donald Trump signed a proclamation on Monday recognizing Israel’s sovereignty over the Golan Heights, reversing more than a half-century of U.S. policy. Standing alongside Israeli Prime Minister Benjamin Netanyahu at the White House, Trump made formal a move he announced in a tweet last week. The president said it was time for the U.S. […]

Braving perils from blood-sucking leeches to tigers and using transport as basic as elephants, scientists have journeyed like “Indiana Jones” to remote locations to collect wild cousins of crop seeds in a project to help tackle climate change. A report released on Tuesday presented the results of a six-year quest to collect thousands of wild […]