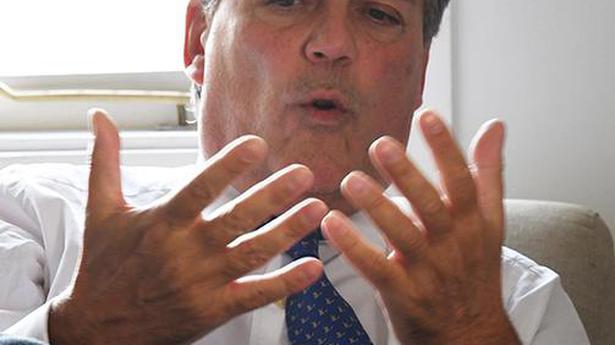 Britain has acknowledged that securing a Free Trade Agreement with India will not be its immediate priority as it prepares to leave the EU and focusses on “first-tier” countries. Instead, Britain would initially focus on tackling existing barriers to trade, the Foreign and Commonwealth Office’s Minister for Asia Mark Field and the head of the South Asia Department Fergus Auld told MP during an evidence session on Tuesday afternoon as part of an inquiry by the committee into the government’s efforts to build a “global Britain” in the wake of Brexit.

Referring to the Department of International Trade (DIT)’s approach to securing post-Brexit trade deals, Mr. Auld said that the Department would first focus on securing FTAs that were “relatively simple” and “where there was clear mutual advantage.”

“I think with India the DIT are looking first at how to deal with other barriers to trade,” and that this would build towards a future trading relationship, rather than going straight for an FTA, said Mr. Auld. He pointed to the lengthy and as-yet-to-be successful negotiations between the EU and India when it came to securing an FTA to show the complexities that would be involved. “It’s no reflection of a lack of importance for India and the economic and trade relationship. It is about sequencing and where to start.”

However, when asked about what the barriers were, Mr. Field noted that businesses have not always found it easy to operate in India. “There have been a number of high trade disputes that required international arbitration,” he told MPs. “We are prioritising in terms of free trade agreements are concerned. It’s not that India is not important but it isn’t in that first tier.”

While it was a positive step that India had risen by 53 ranks in the ‘Ease of Doing Business Index’ between 2016 and 2018, the fact that it remained at position 77 suggested that “there are difficulties that are there”, Mr. Field told MPs. There were therefore other FTAs that would be “easier and smoother to manage”, he said, pointing in particular to those that had already been struck with the EU such as Japan and South Korea. “We want to do all we can to get the relationship with India as ready as we can to be in that position.”

Asked by one MP if the government recognised the significance of the issue of visas for India, Mr. Field acknowledged that this was an issue between the two countries — with the matter of visas raised during “every single conversation with our counterparts” but insisted that significant improvements had been made by the U.K, and that perception was yet to catch up with reality.

He also rejected a suggestion by one MP that Britain was more generous to an “autocracy than a democracy”, by offering a two-year visitor visa to Chinese nationals that was not available to Indians.

The Chinese visa, he said, was simply a pilot, whose efficacy was still being examined, and if this were to be found suitable, could potentially be replicated for India in the future.

Prime Minister Theresa May set out on Tuesday a “new deal” for Britain’s departure from the European Union, offering sweeteners to opposition parties in her fourth attempt to break an impasse in parliament over Brexit. Three years since Britain voted to leave the EU and almost two months after the planned departure date, May is […]

German Chancellor Angela Merkel will pay a three-day visit to India beginning October 31 with an aim to further broadbase strategic ties in an array of key areas including defence and security. Official sources said Ms. Merkel and Prime Minister Narendra Modi, in their wide-ranging talks, will particularly focus on giving a new momentum to […]

Officials said Friday that there are no indications of survivors and that a search for the last person yet to be recovered would resume in the morning, depending on weather. Those who were recovered have not been identified and their families are being notified, authorities said. A search began for the helicopter carrying a pilot […]