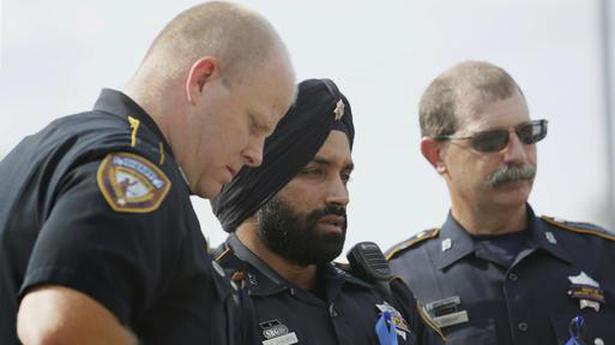 A Sikh law-enforcement officer has been fatally shot multiple times during a traffic stop in the U.S. state of Texas, a media report said Saturday.

Harris County Sherrif’s Office Deputy Sandeep Dhaliwal, 42, pulled over a vehicle when someone approached him from behind and opened fire near Cypress city, the Houston Chronicle quoted Sheriff Ed Gonzalez as saying.

Dhaliwal was a 10-year veteran on the force, and the agency’s first Sikh deputy.

“He was a hero,” Gonzalez said. “Deputy Dhaliwal was a trailblazer.”

He was taken by helicopter ambulance to the Memorial Hermann Hospital, where he died. Authorities detained a possible suspect, the sheriff tweeted.

According to the media report, the dashcam video shows Dhaliwal and the suspect, still in his car, having a conversation with no sign of confrontation. A few seconds after Dhaliwal returned to his squad car, the suspect ran up and shot him.

Mr. Gonzalez recounted Dhaliwal’s efforts after Hurricane Harvey in Texas in August 2017, and how he went to Puerto Rico after the island was devastated by Hurricane Maria in September that year.

Dhaliwal worked with United Sikhs, a global humanitarian relief and advocacy nonprofit, to help organize the donation of truckloads of supplies for first responders after Harvey.

Four years ago, the then Sheriff implemented a policy to allow Dhaliwal to wear turban and beard for the first time while patrolling Harris County streets.

There are no words to speak to how heartbroken we are, how devastated, Mr. Gonzalez said.

U.S. President Donald Trump on Friday underlined his personal support for North Korean leader Kim Jong-un, even if he admitted that Pyongyang’s recent missile tests “may” violate a UN resolution. “There may be a UN violation, but Chairman Kim does not want to disappoint me with a violation of trust, there is far too much […]