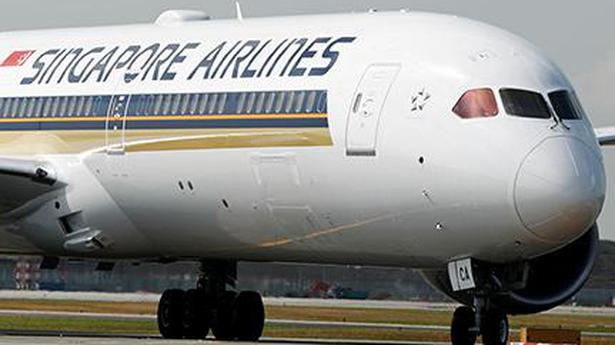 A Singapore Airlines flight from Mumbai made a  safe landing at Changi Airport on Tuesday morning, after the pilot raised a bomb threat alert.

Officials said the threat call received when the flight was airborne turned out to be a hoax.

The flight SQ 423 was escorted safely to Changi Airport by Singapore’s Air Force and landed at about 8 a.m. local time.

“Except for a woman and a child, the rest disembarked safely and had to undergo security screening before they could leave,” staff from the airline’s Mumbai office said.

Singapore media said that the woman and the child were held back for questioning by the police, who are investigating the incident.

Preliminary checks showed that the airline had received a call after the aircraft took off from Mumbai airport at 11.35 p.m. on Monday.

A Singapore Airlines spokesperson in a statement said, “Singapore Airlines confirms there was a bomb threat concerning SQ423 operating from Mumbai to Singapore. We are assisting the authorities with their investigations and regret that we are unable to provide further details.”

The Afghan government said it would release another 100 Taliban inmates on Thursday, even though the insurgents have walked out of talks over a comprehensive prisoner swap and dismissed Kabul’s piecemeal freeing of captives as “unacceptable”. The administration of President Ashraf Ghani on Wednesday released 100 low-risk Taliban prisoners who had vowed never to return […]

US President Donald Trump on Saturday opened a new front in the impeachment battle that threatens his administration, blasting a prominent member of his party for criticizing his push to get foreign nations to probe a leading Democratic rival. The Republican president, who launched a stream of invective at Democrats and the media this week […]