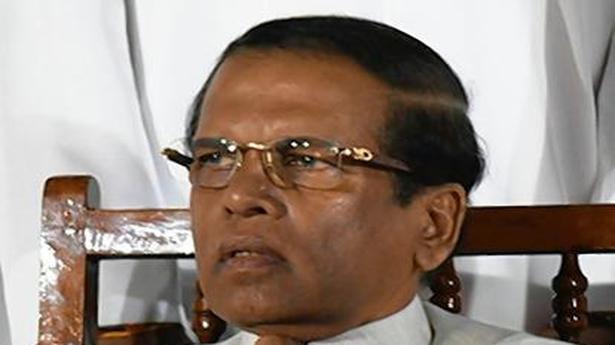 President Maithripala Sirisena on Friday said that he conveyed to the Speaker earlier this week that the ongoing probe into the Easter attacks by a parliamentary panel could hinder court proceedings in the criminal investigations of the bombings.

On Thursday, however, the Parliamentary Select Committee (PSC) — which was informed of the President’s note — told the Speaker that sittings would continue. In a letter to the Speaker, PSC members said the Parliament is the sole judge of its powers and privileges, and had exclusive jurisdiction over its own proceedings, The Hindu has learnt, from top sources familiar with the correspondence.

In a meeting with senior police officers on Friday, Mr. Sirisena said he had written to the Speaker, citing the backdrop of five cases filed on the Easter bombings. “I shared with the Speaker the Attorney General’s written observations that the [parallel] investigation by a Parliament committee could affect proceedings. But, it is sad that the Speaker did not express any view on the matter in Parliament,” he told the officers, according to a press release issued by the Presidential Media Division.

In a letter dated June 4, Mr. Sirisena sought to draw the Speaker’s attention to the AG’s opinion that the proceedings of the committee “could be prejudicial and would cause adverse impact on the judicial proceeding in the Supreme Court.”

In a strongly worded response dated June 6, a copy of which is in The Hindu’s possession, members of the PSC told the Speaker that the judiciary and the Parliament have “historically maintained comity of relations and are capable of continuing that great tradition”. Any attempt by the executive to interfere in our relationship “is unlawful”, and potentially “a breach of privileges” of the committee and the House.

The response signed by the PSC members also cites earlier rulings that the executive or the judiciary cannot interfere with the powers and privileges of the legislature.

The last time the executive and legislature clashed was in late 2018, when Mr. Sirisena prematurely dissolved Parliament. The Supreme Court subsequently ruled that his move dissolving Parliament and calling for snap polls, which led to a nearly two-month long political crisis, was illegal.

Further, in Friday’s meeting with the senior police officials and later, at an “emergency Cabinet meeting”, Mr. Sirisena vowed not to send any officer in service to testify before the parliamentary panel. He observed that the sittings, which the media have been allowed to cover, could have a bearing on national security, sources said.

His decision comes a day after a suspended IGP and a former Defence Secretary shared damning evidence of having received prior intelligence on possible terror attacks ahead of the April 21 bombings. IGP Pujith Jayasundara and former Defence Secretary Hemasiri Fernando told the PSC on Thursday that warnings of a security threat had been available since April 9, and that the director of the State Intelligence Service informed both officials on the eve of the attacks, and hours before serial blasts shook the country, killing over 250 people. Further, their testimonies also exposed the lapses in intelligence sharing within the security establishment led by President Sirisena, who helms the Ministry of Defence and the Ministry of Law and Order.

At Thursday’s PSC sitting — the third session — acting chairperson Jayampathy Wickramaratne said it was the first time in the country’s history that media could cover a parliamentary panel’s sitting.

On concerns that giving the media access to proceedings may impact national security, Mr. Wickremaratne earlier said that exposing the negligence of officials, who had failed to thwart terror attacks despite prior warnings, was not a threat to the country’s national security. “The public have the right to know,” he said.

The “unilateral invasion” of northern Syria has resulted in widespread casualties and destruction, US Defense Secretary Mark Esper said on Monday. This has also undermined the successful multinational “Defeat ISIS” mission in Syria, Mark Esper said. Esper will be visiting NATO next week in Brussels and he plans to press members of the alliance to […]

Climate protesters in Germany tell carmakers ‘the party is over’

Thousands of protesters marched in front of Frankfurt’s IAA car show on September 14 to demand a swift end to combustion engines and a shift to environmentally friendly vehicles as Chancellor Angela Merkel’s government prepares to unveil climate protection measures. Police in Frankfurt said some 15,000, including many cyclists, took part in the march. Organisers […]