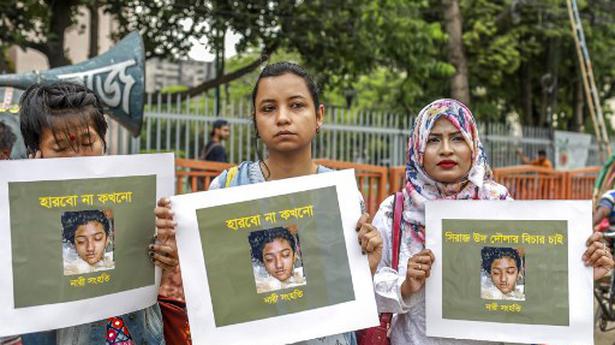 A court in Bangladesh sentenced 16 people to death on October 24 over the murder of a 19-year-old female student burnt alive in April that provoked outrage across the country.

Nusrat Jahan Rafi was doused in kerosene and set on fire after refusing to withdraw a sexual harassment complaint against the head teacher of the seminary she attended.

“The verdict proves that nobody will get away with murder in Bangladesh. We have the rule of law,” prosecutor Hafez Ahmed told reporters after the verdict in a crowded courtroom.

Rafi was lured to the rooftop of the seminary where her attackers pressed her to withdraw the complaint she had filed with police. When she refused, she was tied up and set on fire. She suffered burns to 80% of her body and died in hospital five days later on April 10.

Her death triggered outrage and also highlighted an alarming rise in sexual harassment cases in the South Asian country of 165 million people.

Protesters in the capital Dhaka staged days of demonstrations seeking “exemplary punishment” for the killers. Prime Minister Sheikh Hasina had promised to prosecute all those involved.

Rafi had gone to police in late March to report the sexual harassment, and a leaked video shows the local police station chief registering her complaint but dismissing it as “not a big deal”.

At the time police had said that one of the 18 people initially arrested had accused the school’s principal of ordering the attack. The teacher “told them to put pressure on Rafi to withdraw the case or kill her if she refused”, senior police superintendent Mohammad Iqbal, who led the investigation, had told AFP.

Activists say the murder exposed a culture of impunity surrounding sex crimes against women and children, and that fact that those who report harassment often suffer a backlash. Prosecutions are also rare in cases of rape and sexual assault.

After the murder, Bangladesh ordered some 27,000 schools to set up committees to prevent sexual violence. Defence lawyers said they would appeal against Thursday’s verdict in the high court. The case was fast-tracked with the hearing taking only 62 days.

Former British Prime Minister John Major has asked to join legal action to try to block current Prime Minister Boris Johnson from suspending parliament before Brexit. Mr. Major, prime minister from 1990 to 1997, said he would join anti-Brexit campaigner Gina Miller in pursuing a judicial review of the order to close parliament from mid […]

Sri Lankan Prime Minister Mahinda Rajapaksa arrived in New Delhi on Friday evening on his first official visit abroad after being appointed to the office by President Gotabaya Rajapaksa, who is his younger brother. Mr. Rajapaksa is scheduled to meet Prime Minister Narendra Modi at noon on Saturday while External Affairs Minister S. Jaishankar will […]

The euro fell to its lowest since October on Friday after German industrial output for December recorded its biggest decline in a decade and strong employment numbers in the United States encouraged investors to buy the dollar. MUFG analyst Derek Halpenny said weak data in Germany undermined European Central Bank President Christine Lagarde’s comments on […]