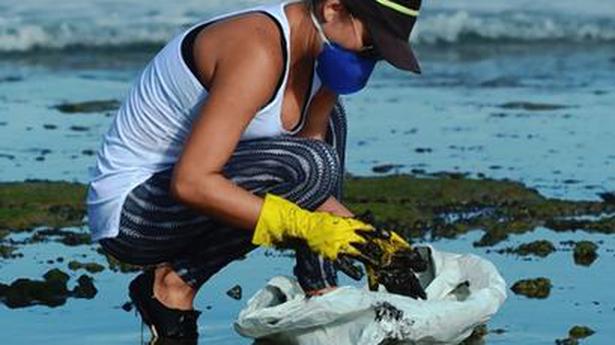 It’s a scene out of an international thriller. A mysterious oil tanker has dumped huge amount of crude oil waste across Brazil’s north-east region, covering its beaches and marine life with a dark sludge.

One of the worst ever oil spills in the world, the ecological disaster has sparked several conspiracy theories whose trail runs from Venezuela to Russia through India and China. But the Brazilian government has not only failed to contain the spill, it remains clueless about who committed this crime.

In September, dark spots began to appear on a beach in north-east Brazil. Within days, the sludge was being reported from other regions. It was everywhere: sitting on golden sand and rocks, covering birds and turtles, killing fish, and spilling into rivers. In six weeks, the sludge — a mix of crude waste, machine oil and water — has spread along 2,250 km in 62 municipalities, contaminating over 130 beaches. For weeks, local staff and volunteers have been clearing the stained sand and rescuing animals, but more sludge has continued to reach the shore with waves.

Govt. adds to the confusion

The federal government has only added to the confusion. On Thursday, a day after a Greenpeace protest in Brasilia, Environment Minister Ricardo Salles said that the oil may have been spilled by a ship of the NGO itself. Just a few hours earlier, Mr. Salles had claimed that the oil waste originated from Venezuela.

In the past 50 days, more than 900 tonnes of sludge has invaded over 200 spots in the Brazilian north-east, affecting daily life and tourism. Public fury against the government has been on the rise as ordinary folks wade knee-deep into the sludge, rolling up the oil slick and dropping it into garbage bags.

All this while, the government has just floated theories without offering any evidence. In mid-October, before any scientist could find the oil’s origin or satellite data could reveal the identity of the ship responsible for the spill, the Brazilian government claimed that the oil was from Venezuela. Media reports, quoting government sources, suggested that a “dark ship” was most probably carrying the oil to Asia. “Companies from India, Singapore and other countries in South and South-east Asia are among the only ones still buying Venezuelan oil… To circumvent the sanctions, many tankers have their transponders turned off before docking in Venezuela,” said a report on a Brazilian website, raising questions about an oil tanker called MT Ekta. But the only ship of this name was, according to public data, decommissioned in 2017 and scrapped at the Chittagong port in Bangladesh in 2018. But the Brazilian Navy is still hunting for the elusive ship which might have released as much as 3,00,000 tonnes of waste into the sea. Speaking to reporters on Thursday, Navy Commander Ilques Barbosa said the government was now focusing on 30 vessels from 10 different countries. “We went from 1,000 ships to 30 ships,” the official said. “Most likely it is a dark ship or a ship that has had an incident and, unfortunately, has not shared the information as it should have,” he said, explaining that, by international convention, every shipping incident must be reported by the commander in-charge.

Even as Brazil looks for the culprit, many people blame the government for the disaster. In April this year, President Jair Bolsonaro dismissed two committees, established in 2013, that were part of the national contingency plan for oil pollution incidents. Last week, a federal prosecutor filed a case against the government for “omission in the face of the biggest environmental disaster on the Brazilian coast”. Across the country, there is anger against the government’s response. “The government’s actions show that the Bolsonaro administration lacks technical and management capacity to deal with environmental disasters,” said Opposition Senator Randolfe Rodrigues.

This year has been particularly disastrous for the environment in Brazil. There has been no let-up in the fires eating away swathes of Amazon forests. Now, the coastline has been smudged with dirty oil. But Mr. Bolsonaro has been busy blaming unknown forces. Last week, he floated a theory that the oil spill might be an “act of crime” to “sabotage” an oil deposits auction in November that’s expected to generate $50 billion in fees for Brazil. “We have to be very responsible about what we say. It could have been a criminal act to harm this auction,”he said. “It’s a question that’s out there.”

There is definitely a question, now, about Brazil’s commitment to its environment.

Shobhan Saxena is a journalist based in São Paulo, Brazil

Weeping amid wails from a crowd of hundreds of thousands of mourners, Iran’s Supreme Leader on Monday prayed over the remains of a top Iranian general killed in a U.S. airstrike in Baghdad, an attack that’s drastically raised tensions between Tehran and Washington. The targeted killing of Iranian military commander Qassem Soleimani already has seen […]

The number of people in hospital with coronavirus fell by 205 to 17,178 on Saturday, continuing a gradual decline that has continued for more than five weeks Source: thehindu.com Related

The death toll from an outbreak of coronavirus in Italy has surged by 919 to 9,134, the Civil Protection Agency said on Friday, easily the highest daily tally since the epidemic emerged on Feb. 21. Prior to Friday’s figure, the largest daily toll was registered on March 21, when 793 people died. Read: U.S. tops […]