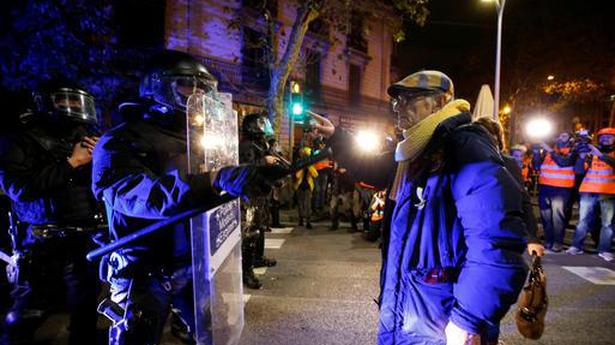 Waving separatist flags and chanting “freedom for political prisoners” thousands of supporters of Catalan independence gathered in Barcelona for concerts and rallies on November 9, a day before Spain heads to the polls for a general election.

The election campaign has been dominated by the Catalonia separatist issue after weeks of sometimes violent protests that followed the Supreme Court’s ruling on the Catalan leaders.

“We have to be imaginative,” she said. “We have to do things that have impact in the world,” she added, arguing that separatists were not taken into account in the rest of Spain.

But away from the protests, some Barcelona residents were sceptical that things could change for the region, where separatism is a highly divisive issue.

“I see (it as) very complicated for the situation in Catalonia to be resolved, because at the national level, that is to say at the Spanish level, I do not see that there is a great desire to do it,” said Maria Rodriguez, a 33-year old actress.

Democratic Tsunami, which advocates non-violent actions, called on supporters to hold festive events across the region on Saturday afternoon.

Security was increased in some areas of Barcelona ahead of the election, with government sources saying they were worried about the risk some of Saturday’s rallies could turn violent.

The campaign for Catalan independence has been mostly peaceful for years, but some protests turned violent last month, with a minority of mostly young people torching cars and launching petrol bombs at police.

The goal is to “guarantee that everyone can exercise their right to vote,” the spokesman said.

A Catalan police spokeswoman declined to comment on the force’s security plans.

Carme Martin, 68, who attended Saturday’s protest said she could understand some of the youth’s frustration after some of last month’s riots in Barcelona.

“I don’t like violence but (I understand) if it is defensive,” she said.

After receiving an input from Indian intelligence, Nepal Police arrested underworld don Dawood Ibrahim’s associate Yunus Ansari. It has been found that Yunus Ansari had been carrying out illegal activities for ISI in Nepal. Along with Ansari, three Pakistani nationals were nabbed with around Rs 7.5 crore of fake Indian currency notes. The fake money […]

Policemen in Pakistan’s capital city of Islamabad will be provided with body cameras to record encounters so that the video can be used as evidence in courts and also to restore the public’s faith in the law enforcement agency. The recordings will help keep all parties honest and allow them to gain some confidence in […]

US President Donald Trump has nominated Mark Esper, an Army veteran, to be the next defence secretary, as the Pentagon faces a leadership vacuum amid a mounting confrontation with Iran. The decision comes as lawmakers increasingly pressure the president to bring stable civilian leadership to the Pentagon after Jim Mattis abruptly resigned as defence secretary […]