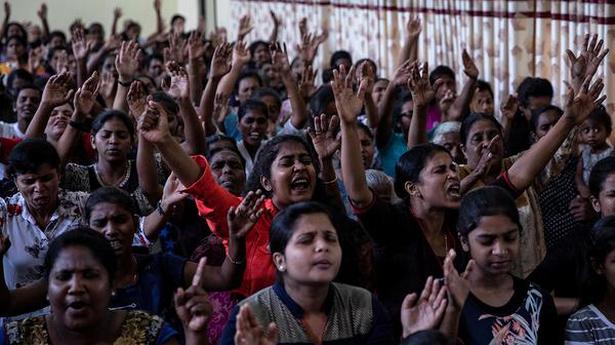 Father Suranga Warnakulasuriya said prayers alone in his church on Sunday, as Catholic services were suspended across Sri Lanka for the second straight week since the Easter suicide attacks. With the Army staging raids across the country and authorities maintaining high levels of security, the country’s 1.25 million Christians are still on edge after jihadist bombers killed 257 people.

Fr. Warnakulasuriya has been saying mass in an empty church in Negombo, just north of the capital, every day since the slaughter at three hotels and three churches, one not far from his. “Sometimes we feel lonely by not being able to celebrate the mass together,” admitted Fr. Warnakulasuriya, 32, who only became a priest in 2015.

With churches closed, the country’s Catholics had to make do on Sunday with a second televised mass by the Archbishop of Colombo, Cardinal Malcolm Ranjith.

A few people went to St. Anthony’s Shrine in Colombo to say prayers in front of a barrier set up in front of the church where dozens died on April 21. But the faithful are frustrated.

“It’s not enough because we cannot receive the eucharist through television, that’s the important thing,” said Shehani Rangana, 33, whose father was among the dead at St. Sebastian’s church in Negombo. Since the bombings, Catholics — shaken by physical and psychological scars from the jihadist attacks — have been organising their own services and solidarity groups. Sometimes, Fr. Warnakulasuriya and other priests say prayers in the homes of parishioners. Ms. Rangana put up a cross of dried leaves at the door of her home for one service.

Fr. Warnakulasuriya said he goes to up to 20 homes each day to celebrate communion. “They share their views on this attack,” he said. “Sometimes they have hatred feelings, so we try to control them, to persuade them not to have revenge. We try to calm them by saying that Jesus is not hatred but love.”

Around St. Sebastian’s Church, ravaged by a suicide bomber who killed 102 people, nearly all the houses have white flags, the colour of mourning.

The bigger pennants are a sign that someone from the house died in the massacre.

The local cemetery did not have enough room to bury all the dead and one local resident offered land so that victims could be buried together.

The Catholic leadership has assigned a support team of a priest, two nuns and two volunteers for many of the families that were torn apart by the bombers.

Father George Anthony Fernando is leading the team watching over Nethudini and her family.

“Depending on their requirements, counselling will take the time needed. I might come two or three times per week to visit them. I have been assigned only this one family,” said Fernando.

The priest said that the contact with the family was even more important as “life has slowed down” with no services being held and the Christian community is in fear.

Public schools will only reopen on Monday after an Easter break was extended because of the bombings. Security forces will be on duty around schools in a sign of the charged atmosphere.

Every night at St Sebastian’s, as soon as night falls, the church becomes out of bounds and is surrounded by armed soldiers.

But local families still come out every evening to light oil lamps and candles on the outside church wall. With their eyes closed tight, they say a short prayer before silently walking away.

Police say the death toll in the Easter Sunday bombings in Sri Lanka has risen to 359 and more suspects arrested. Police spokesman Ruwan Gunasekara said on Wednesday that 18 suspects were arrested overnight, raising the total detained to 58. The Prime Minister warned on Tuesday that several suspects armed with explosives were still at […]

Prime Minister Boris Johnson has cleared for publication a parliamentary report into alleged Russia interference in British politics, his spokesman said on Monday, but no date has been set for its release. The Conservative leader “is content publication would not prejudice the functions of those bodies that safeguard our national security”, the spokesman told reporters. […]