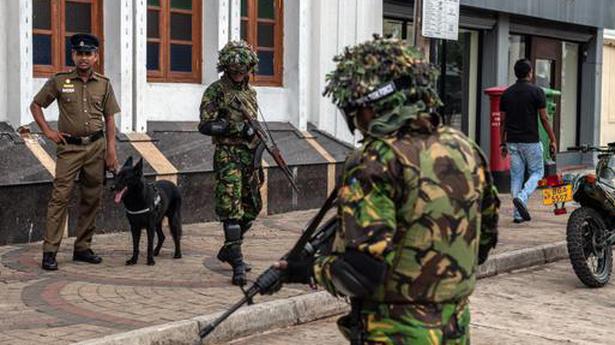 Sri Lankan security forces exchanged fire with suspected Islamic State affiliated militants and killed at least four of them in the east of the country, according to the police and the military on Saturday. Following this, as many as 15 bodies have been found at a house in Sainthamaruthu, located in Sri Lanka’s eastern Ampara district.

The development comes in the wake of Sri Lanka’s heightened search for suspects linked to the Easter day serial blasts that claimed over 250 lives last Sunday.

Here are the live updates for today, with inputs from our Colombo Correspondent Meera Srinivisan:

Sri Lanka’s police chief has refused a request by President Maithripala Sirisena to step down following suicide bombings on churches and hotels, two sources at the president’s office said on Saturday, deepening the rift at top levels of government.

Mr. Sirisena, facing criticism over the failure to thwart the attacks, blamed the inspector general of police Pujith Jayasundara and Defence Secretary Hemesiri Fernando for not sharing advance warnings of the attacks with him. Mr. Fernando resigned earlier in the week, but Jayasundara was holding on, the two officials said.

“He has refused to resign despite the president’s request,” one of the sources said. Under Sri Lanka’s constitution, only parliament can remove the police chief through a lengthy process designed to shield officers from political interference.

Sri Lanka’s former wartime defence chief, Gotabaya Rajapaksa, said on Friday he would run for president in elections this year and would stop the spread of Islamist extremism by rebuilding the intelligence service and surveilling citizens.

Gotabaya, as he is popularly known, is the younger brother of former President Mahinda Rajapaksa and the two led the country to the defeat of separatist Tamil rebels a decade ago after a 26-year civil war.

The police said that 20 more people were arrested in connection with the April 21 bombings.

Officials also seized one kg of explosives near a railway station at Wellawatta, a popular south Colombo suburb. The curfew was lifted for other areas at 4 a.m. on Saturday. – PTI

As many as 15 bodies, including those of six children and three women have been found at a house in Sainthamaruthu, located in Sri Lanka’s eastern Ampara district, Saturday morning.

“An explosion occurred late night,” military spokesperson Brigadier Sumith Atapattu told The Hindu. The “explosion,” he said followed rounds of gunfire exchanged between security forces and Easter attacks suspects, who were reportedly near the house. “We believe they set off the explosives following the gunfire,” he said.

Sri Lankan security forces raided a safe house of Islamic State affiliated militants in the east of the country and killed at least two men in an exchange of fire, the military said.

Gunmen opened fire on troops when they attempted to storm the house in the town of Kalmunai, spokesperson Sumith Atapattu said. “In our retaliatory fire, two gunmen were killed,” he said adding that a civilian caught in the crossfire was also killed.

Investigators identified Hashim as the leader of the National Thowheed Jamaath, which they said executed the highly coordinated blasts on Sunday. Over 250 people, including 45 children and 40 foreign nationals, were killed in the deadly explosions. Two days later, the Islamic State claimed responsibility for the attacks and subsequently released an image of eight suspected bombers. The man seen standing at the centre is believed to be Hashim. The other jihadists had covered their faces with a scarf.

Japanese officials are investigating an outbreak of the coronavirus among crew members of a cruise ship in Nagasaki, which has puzzled authorities because the southern port city has a relatively low number of infections and the vessel has been docked for almost three months. The outbreak on the Italian-operated Costa Atlantica surfaced Tuesday when officials […]

Trump says he’s an ‘island of one’ on Syria

President Donald Trump said Saturday that he is an “island of one” for removing U.S. forces from northeastern Syria. But he remained steadfast and defended a move that drew widespread bipartisan criticism that he has endangered stability in the Middle East and risked the lives of Syrian Kurdish allies who helped the U.S. bring down […]