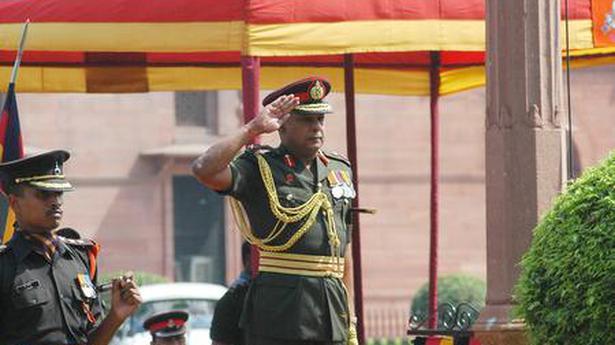 Sri Lankan President Maithripala Sirisena on Monday appointed former Army Commander Gen. S. H. S Kottegoda as the Secretary of Defence. The appointment comes days after Hemasiri Fernando resigned from the post, taking responsibility for the Easter attacks though he said “there was no failure” on his part.

Following the ghastly explosions last Sunday, both President Sirisena and Prime Minister Ranil Wickremesinghe said they were not aware of the prior warnings on likely attacks that intelligence officials had obtained at least a fortnight earlier. India is also said to have shared intelligence on April 4, on the security threat.

Further, President Sirisena on Monday named Deputy Inspector-General Chandana Wickramaratne as the acting police chief. The incumbent, who Mr. Sirisena had asked to resign, has refused to do so, but was asked to go on “compulsory leave”, sources said.

As per Sri Lankan law the IGP can be removed from the post only with a parliamentary resolution backed by a majority and based on a subsequent inquiry by a committee.

The changes to the top posts come in the wake of Mr. Sirisena’s announcement to overhaul the country’s security apparatus following the serial bombings on April 21, in and around Colombo, and in the eastern city of Batticaloa.

More than than 250 people, including 45 children, died in the coordinated blasts.

Global terror financing watchdog FATF on October 18 retained Pakistan on its Grey List till February 2020 for its failure to take adequate action against money laundering and terror financing. The Financial Action Task Force after its five-day plenary, which concluded at its headquarers in Paris on October 18, noted that Pakistan addressed only five […]

Bangladesh moves citizens away from coast

Bangladeshi authorities on Saturday ordered more than 4,00,000 people to flee coastal villages and islands as Cyclone Bulbul headed for the Bay of Bengal coast. The eye of the storm, packing winds of up to 120 km per hour, was expected to hit land around the Bangladesh-India frontier late on Saturday. A storm surge up […]